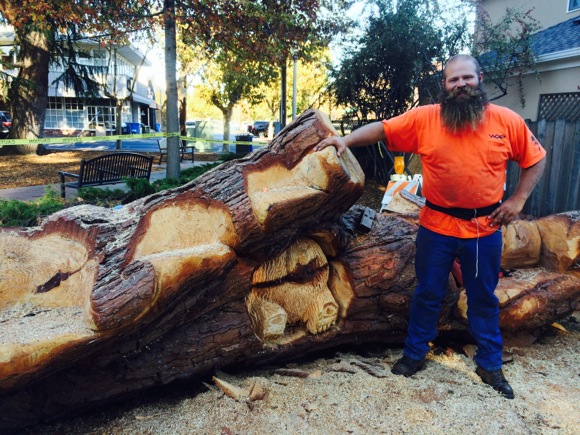 From disaster and death can come the birth of something good (myth of the phoenix). The big Italian stone pine that guarded the eastern side of Fremont Park had to be taken down in September, a disturbing event for many in our community. From the collective brainstorming of residents and city of Menlo Park staff, the idea arose to transform the lower part of the tree into a piece of art along with a play structure for Fremont Park.

The City has an ongoing contract with West Coast Arborists for tree maintenance. Big Jon Mahoney, a chain-saw artist, works for West Coast and was contracted to use his imagination to create something from the downed tree. He is working on two sections of the trunk plus the stump itself. From the latter he is creating a chair. From the former, one section is proving to be a whimsical set of seats, while the other is becoming a children’s play structure.

The end of one tree section facing the nearby walkway will be cut and sanded flat to expose the approximately 70 growth rings (exact number to be determined later). Menlo Park Historical Association Board member Jim Lewis was contacted by city staff to suggest some appropriate local historical dates with which to mark a half dozen or so of the rings, which will then be protected by a permanent transparent cover. Jim and this author (MPHA President) immediately noticed that the rings tell us that the tree was probably planted when the park was first created (early 1930s, see story in The Gate Post for Oct-Dec 2011).

Behind this artwork, along the fence to the east, the plan is to plant three deodar cedars (same type of tree as on the north side of the project, i.e., toward University Avenue). Because of limited funds, these trees will be a modest 24-inch or so box size, but they will eventually fill the glaring hole in the arborscape to the east.

But there is more! Christian Bonner, the City Arborist, explains that most of the tree’s wood has been given to Menlo Hardwoods (846 Santa Cruz Avenue), who will use it to fabricate some interesting furniture, the sale of which will create funds to be returned to the City for the purchase of a large tree (type not yet determined) to placed between the fence and the walkway.

Fremont Park gets new art, a creative play set, and new trees! The trees will eventually restore the arborscape.

Photos by Jym Clendenin, a frequent contributor to InMenlo