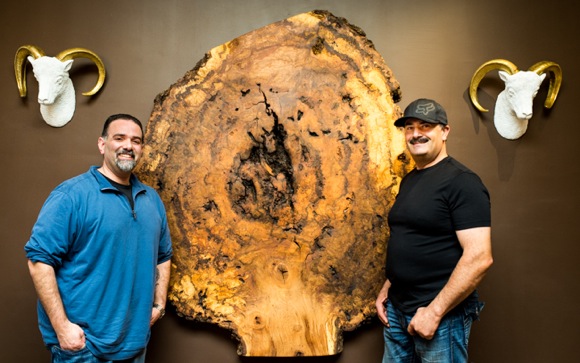 The beautiful new Menlo Hardwoods store on Santa Cruz Avenue in Menlo Park was the result of “too much walnut,” at least that’s what co-owners — and friends since childhood — Mike Balat (right) and George Bazlamit (left) maintain.

“We had so much walnut, we didn’t know what to do with it,” says George, who’s been in the design and construction business for two decades. “It takes four to five years of cure time before you can use it. We’d been selling it wholesale but had enough walnut for our grandkids!”

Their idea was to open not just a retail storefront but “the” storefront, and downtown Menlo Park was the leading place to locate from the beginning.

“Most of my clients are in this area,” says Mike, who is a custom cabinet maker. “I was familiar with downtown and the local stores that could complement our business.”

Adds George: “Santa Cruz Avenue is a furniture destination for the Peninsula. People come in and say, ‘this is great,’ because they can get a lot of shopping done in one place without having to go to the City.”

On display in the store is a sampling of the duo’s custom one-of-a-kind, live edge and contemporary solid wood furniture. Ninety-five percent of the business continues to be walnut, which comes from the Central Valley and has the scientific name of Juglans hinds.

But occasionally their wood comes from more local sources. “One of our clients here in Menlo Park had a large heritage oak that was diseased,” says George. “We milled it and are turning it into furniture for them.”

The partners like being next to Traditionally Derby and Flegels and say they got lucky with the timing of the opening of their retail space last August. “When we moved in a lot of the other empty spaces on Santa Cruz filled up, too!”