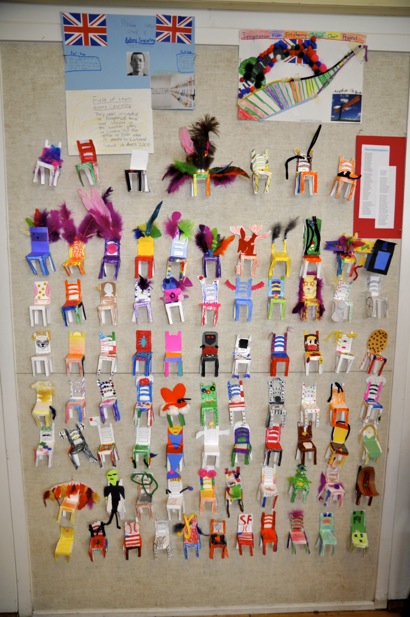 Cultural Arts Day has been part of the fall curriculum at Encinal School in Atherton for the past decade. This year the spotlight was on the British Isles. There was a lot of ground to cover. In addition to England, Scotland, Ireland and Wales, the British Isles include over 6,000 smaller islands!

“We have students from around the world here at Encinal,” said Sharon Burns, principal of the K-5 school. “What better way to promote and appreciate diversity than to focus on the culture and arts of a different region each year.” 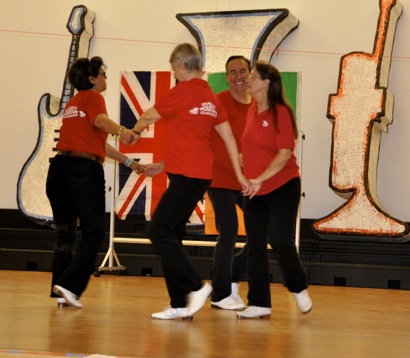 Activities took place today in both classrooms and larger spaces. The smaller of two multi-purpose rooms was turned into a Cultural Arts Day Museum, featuring not only performances but artwork the students contributed, such as the chair assemblage shown with this article. It pays homage to the Field of Chairs by Antony Gormley. Explained the signage that accompanied the artwork: “They were originated in Abingdon, UK [and were shown] in the Saatchi Gallery in London. 750 of them grew to 1,500 when [they] moved to Larkmead School in March, 2009.”

Forty parent volunteers contributed to the success of today’s event along with numerous entertainers who performed free of charge. These included the Melody Pipes, Mad Molly’s morris dancing, actors from the San Francisco Shakespeare Festival, and the Diablo Mountain Cloggers (shown).

I encourage other parents to volunteer for this next year, I had a great time helping out in the classroom!