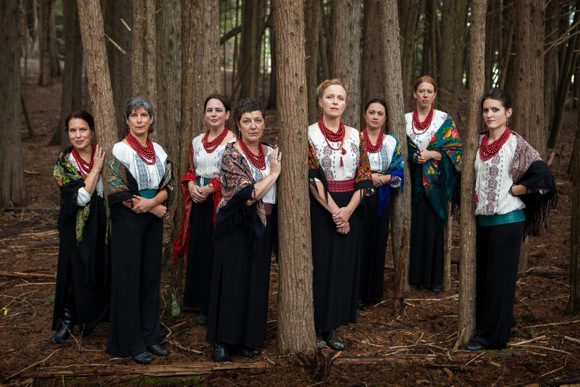 Few things evoke the magic of the winter holidays as the transcendent splendor of the human voice raised in song. Kitka Women’s Vocal Ensemble has researched and discovered a treasure-trove of seasonal music from a wide variety of Eastern European ethnic and spiritual traditions.

The group will present Wintersongs at St. Bede’s in Menlo Park on Dec. 14, showcasing material ranging from rousing Slavic folk carols to lush, meditative Eastern Orthodox sacred choral works, from mesmerizing pre-Christian incantations for the longest nights of the year to Hebrew chants for Chanukah to original new pieces inspired by the beauty and mystery of wintertime.

Each member of the ensemble works closely with native master folk singers and ethnomusicologists, listens to rare archival recordings of traditional Balkan, Baltic, Caucasian, and Slavic singers and choral ensembles, or traces the seasonal musical legacies of her own ethnic heritage.

Kitka, which means “bouquet” in Bulgarian and Macedonian, began as a grassroots group of singers from diverse ethnic and musical backgrounds who shared a passion for the stunning dissonances, asymmetric rhythms, intricate ornamentation, and resonant strength of traditional Eastern European women’s vocal music. Since its informal beginnings, the group has evolved into an internationally-recognized professional ensemble known for its artistry, versatility, and mastery of the demanding techniques of Balkan and Slavic vocal styling.

The performance takes place from 4:00 to 6:00 pm. St. Bede’s is located at 2650 Sand Hill Road. Tickets are available in advance online.