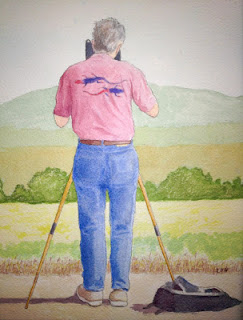 We first profiled Menlo Park-based photographer David Hibbard in 2010 and have followed up with announcements of shows he has exhibited his works in. We got an email from him today:

“If you haven’t been following the photo blog I participate in, I would like to introduce you to it. Some friends and I started it two years ago. We call it f8 don’t wait — a takeoff on the old saying that the secret to successful photography was “f8 and be there.”

“We refer to our blog as ‘a photographic conversation among nine friends’. Each day, one of us posts an image. Our one rule is that the image must be a response, in some way, to the previous day’s image.

“Today is my turn to post. The image I have chosen is a painting I did last week at an art retreat [my wife] Jane and I attended at the Green Gulch Zen Center in Marin County. Most of my posts are photographs, but I like to throw in a drawing or painting occasionally to mix things up.”

Here is the link to David and his fellow artists’ photo blog. More of David’s work can be viewed on his website.

Watercolor painting of David at work, which was done by his father, courtesy of David Hibbard