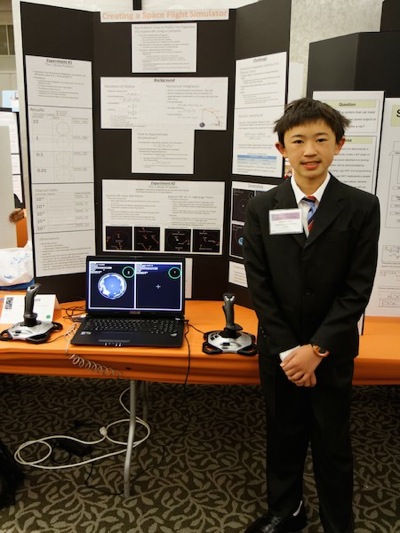 Early in September, Kao was a semifinalist at Broadcom MASTERS, an exclusive state science fair. MASTERS requires its competitors to succeed in school, county, and state competitions prior to presenting before a panel of distinguished scientists.

Kao began his project as an 8th grader, creating video game where he attempted to integrate gravity into space flight. The calculations he performed and the information he learned along the way formed an impressive project that Kao wanted to share at the La Entrada Middle School science fair. After blowing away the judges, Kao continued through rounds until he reached the state competition.

He and the other 2,054 other contestants presented their ideas in the hopes of taking home the title of finalist. The state fair was held in Los Angeles and those who continued on would ultimately present before an impressive panel in Washington, D.C. Despite his failure to advance, Kao’s feat is undoubtedly impressive for a high school freshman, who simply wanted to explore a topic that interested him.

The idea of competing in a science fair is taboo to many high school students. Regardless of the existence of a scientific field students wish to pursue, very little publicity is made about science competitions in general. M-A lacks a formal science fair, making the next available fair the fair hosted by the county.

According to Kao, several of his old science or math teacher offered extra credit for competing, but little incentive is offered to older students. Kao believes, “a school fair would greatly boost participation,”–an easy and beneficial way to promote a competitive and intellectual environment in M-A’s scientifically inclined students.

When asked about the incentives of the other competitors he faced, Kao noted there was “a little bit of everything.” He went on to say how younger competitors didn’t have the desire to impress colleges on their mind, and most did what they did just “out of curiosity” or passion for their respective subjects. Regardless, science fairs provide a fruitful outlet for those passionate about science.

Author Joey Ellefritz is a senior at M-A where he serves as Social Media Editor at M-A Bear News, where this article first appeared; used with permission.