Lauren Goodkind is on mission to get more females playing chess 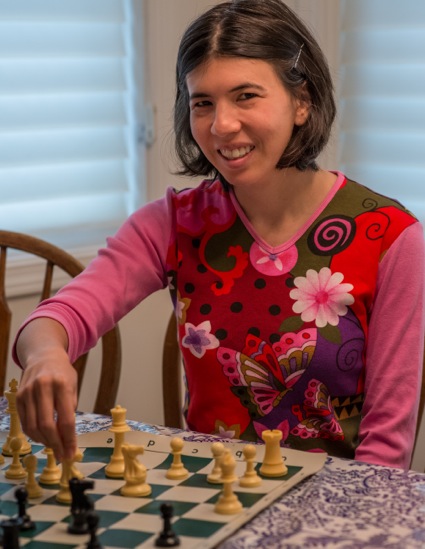 When she was eight, Menlo Park resident Lauren Goodkind learned to play chess, thanks to her mother. To her, it was just like any other game she played with her family, like Monopoly or Checkers. Now as a chess teacher, she hopes that other females will embrace the game.

“When I was 15, my twin sister and I played chess all the time,” she recalled. “My Dad noticed and he took us to a chess tournament. It was so much fun. We got to meet interesting people. I won lots of games so my rating went up quickly.”

While Lauren used to go to participate in lots of tournaments, she currently only plays in two or three a year. She still remembers with excitement a match she had with PayPal founder Peter Thiel in 2003, the first chess master she’d played against. The match ended in a draw; you can see the moves they each made online.

Lauren teaches both adults and kids. “One of the things I’d like to see is more women and girls playing chess,” she says. “Chess is a male-dominated game.

“One of my students is a 10-year-old girl. I started teaching her earlier this year and encouraged her to play in tournaments. She’s won all of her matches and is really positive about chess.”

Playing chess has led to other pursuits. Lauren and her sister produced a local access TV show called Chess Diva and did a fundraiser in downtown Palo Also to raise money for Haitian earthquake relief.