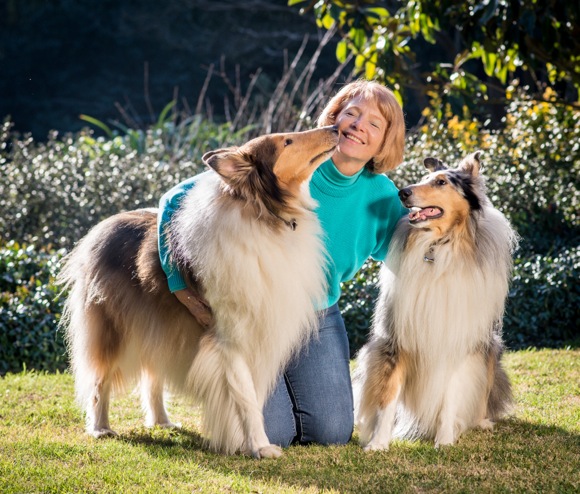 Editor’s note: The top canines in the country are gathered today and tomorrow at the Westminster Kennel Club Dog Show in NYC, so we thought it would be a good day to highlight to local show dogs, one now retired and the other still in training.

We’d come to Anne Robinson’s Menlo Park home to talk about dog obedience training. She teaches beginner classes through the Deep Peninsula Dog Training Club. But after comparing some notes about our years at Menlo-Atherton High School, we veered into new territory, at least for this writer — dancing with dogs. 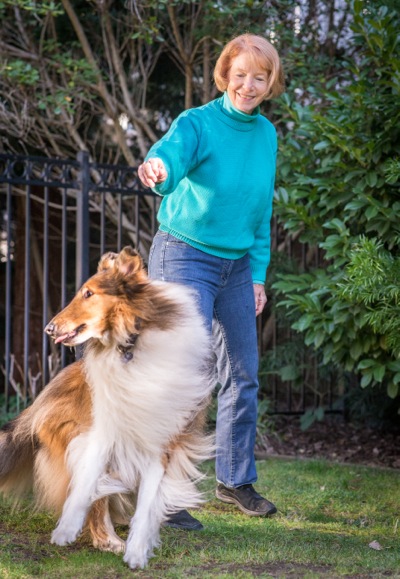 “My older dog, Jib, dances with me,” she explained. “You put on music, and your dog is your dance partner. There’s a well-known team, Carolyn Scott and Rookie, a Golden Retriever. Locally, Jib and I take freestyle lessons from Judy Gamut.

She then demonstrated a few steps for her audience (photo right).

Anne told us that she had dogs growing up in Atherton, and, finding herself single in midlife, got a Collie she named Sailor. “He was smart when it came to training, and I was ok,” she recalled. “I really liked the relationship I was building with him through training.

“I got kind of hooked and started showing in obedience, agility and herding. It was my hobby, but because I was showing I took classes at Deep Peninsula Dog Training and that led to my teaching there.”

She says the people who bring their dogs to her beginning class are “all over the map.” “They can be anywhere from a six-month-old puppy to a 7- or 8-year-old shelter rescue dog.”

Jib is now retired from the show ring and her younger dog, Kite, is a slow-maturing three-year-old who’s still not quite ready. 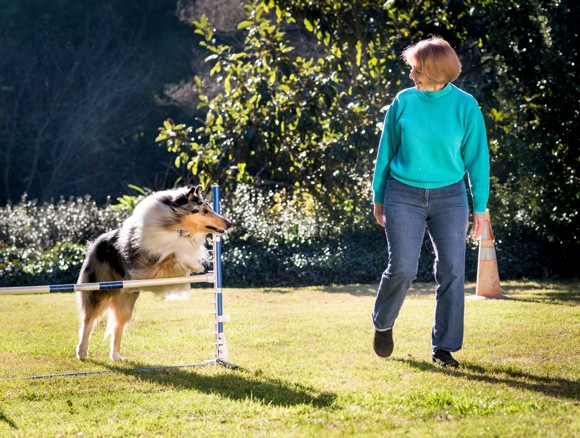 Anne, who has lived in Menlo Park or Atherton her whole life except for four years while attending college, took a foray into Siberian Huskies for a while but soon returned to Collies. She said she may never get another puppy, but will always have dogs in her life.

“When you take a puppy into your life, you ask him or her to leave behind all of their instinctual behavior and channel it instead into what you want them to do,” she said. “That they do so — and so willingly — is a kind of miracle.”