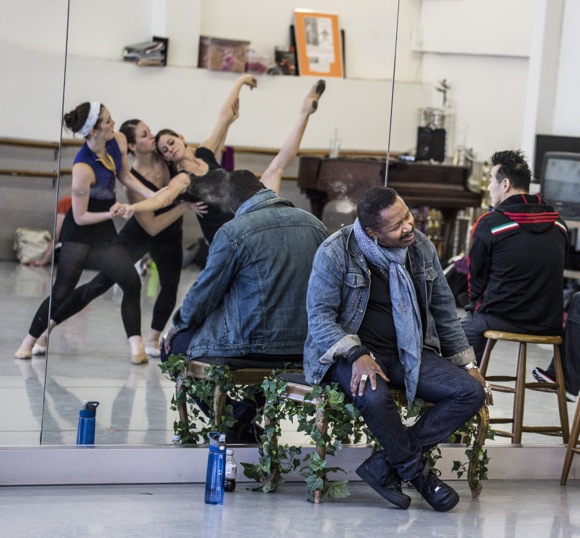 Another premiere, Playing Love, choreographed by Menlowe Ballet’s Artistic Director, Michael Lowe (far right in photo), and the return of Lowe’s acclaimed Legend of the Seven Suns, completes the program. Performances are Friday, March 27 and Saturday, March 28 at 8:00 pm, and Sunday, March 29 at 2:00 pm. Tickets ranging from $28-$48 may be purchased at http://www.menloweballet.org or by calling 800-595-4TIX (4849). MAPAC is located at 555 Middlefield Avenue in Atherton.

Guest choreographer Reginald Ray-Savage founded Savage Jazz Dance Company in 1992. There, as Artistic Director, he has choreographed a career’s worth of exceptional dances that respond to, spring from, and are inspired by the intentions, energy, and rich cultural heritage of jazz music. Of Mr. Savage, Dance Magazine praises, “Once in a great while, a rare person comes on the scene who seems to reincarnate the lessons from his teachers and forbears,” describing his company as “the most layered, sophisticated concert jazz dance company in the Western climes”.

Says Savage: “I created Bru’s Sweet for Menlowe Ballet with the intention of celebrating all that is jazz. The work is sensual, classy, sweet, sexy and sweaty, and Menlowe’s dancers are incredible. They dance the ballet with passion, energy and technique that is quite thrilling.”

Since 2003, Mr. Savage has served as Chair of the School of Dance at Oakland School for the Arts under the executive leadership of Donn Harris. In 1993, Mr. Savage was awarded the Creative Artists Fellowship in Choreography from the City of Oakland, and was later distinguished with a GOLDIE Award by the San Francisco Bay Guardian for “Outstanding Contribution to the Arts”.

Menlowe Ballet Artistic Director Michael Lowe’s newest choreographic offering, Playing Love, is an alluring, romantic neo-classical work that explores human relationships and the facets of love. His Legend of the Seven Suns debuted in 2014 to enthusiastic response. Lowe travelled to Mongolia to research his retelling of a traditional folktale featuring gods, mortals, and a menagerie of engaging animals set against the backdrop of Mongolia’s vast, rugged landscape.

Based in Menlo Park, Menlowe Ballet is a professional ballet company dedicated to bringing dance to audiences throughout the San Francisco Bay Area. Founded in 2011, the company performs works ranging from cultural to classical to contemporary. In addition to its artistic mission, Menlowe Ballet provides performing opportunities to aspiring students from its official school, the Menlo Park Academy of Dance.

Photo of Reginald Ray-Savage during rehearsal by David Allan Sheetz