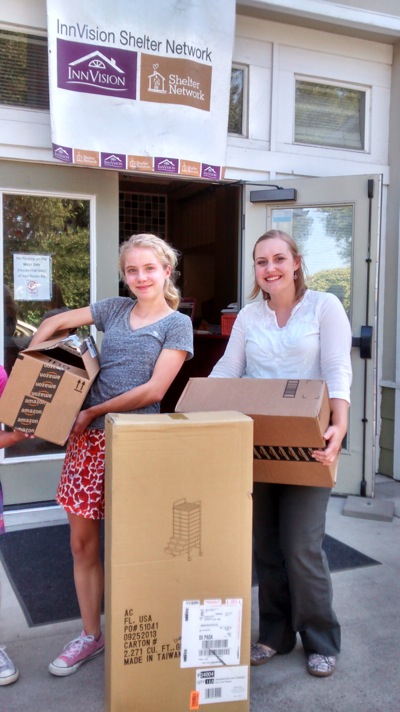 Hillview Middle School eighth grader, Elise Kratzer of Menlo Park (pictured, left), was honored recently for her exemplary volunteer service with a Certificate of Excellence from The Prudential Spirit of Community Awards, and with a President’s Volunteer Service Awarded granted by the program on behalf of President Barack Obama.

Certificates of Excellence are granted to the top 10 percent of all Prudential Spirit of Community Award applicants in each state and the District of Columbia. Hillview Principal Erik Burmeister nominated Elise for the national honor last fall in recognition for the countless hours of service and leadership she has provided.

With the help of other students and committed parents, Elise founded Hillview’s first Service Club as a sixth grader.

“There were a lot of clubs at Hillview, but no clubs focused on service,” said Elise. “Roxy Bozdog helped mentor me to start the club.”

As the President of the Service Club, Elise has led the group in a number of accomplishments. They have raised over $10,000 and have placed middle school student volunteers at service projects at community organizations such as Lytton Gardens, My Red Shoes, and Haven House/Shelter Network.

Service Club co-advisor, Roxy Bozdog says of the work of the 8th grader, “Elise personifies what it means to be a selfless leader who uses her natural talents and compassionate heart to make her community and the world a better place,”.

Elise will be attending Menlo-Atherton High School in the Fall and plans to continue her focus on service. “I’m particularly interested in illiteracy and plan to research what programs M-A has now in advance of maybe starting a new project.”