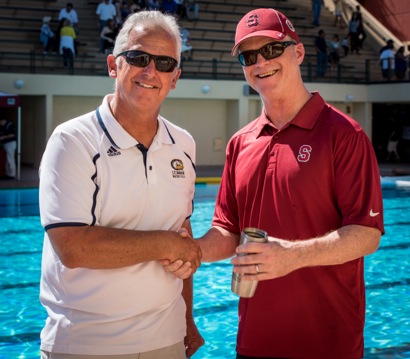 John Tanner (known as JT), coach of the Stanford women’s water polo team, got into the water first at the Circus Club and then at Ladera Oaks around the same time he started grade school. He’s more or less never gotten out.

Jamey Wright, three years ahead of JT at Menlo-Atherton High School and now coach of the UC Davis women’s water polo team, took a more circuitous path to the pool deck, working as a litigator in Sacramento for 13 years, while keeping one toe in the water.

Last weekend, the two M-A grads squared off against each other at Avery Aquatic Center for the second time this season. For the record, #2 Stanford defeated the #11 Aggies both times.

JT (right in top photo) went from playing at M-A to playing at Stanford, and then straight to coaching. He coached at his high school for one year in 1980 before taking the same position at Menlo School. He’s been at Stanford for 18 years now and previously was at Pacific for 12 years.

“The discipline of swimming, the getting up everyday for morning practices, forced me to both manage my time and instilled a good work ethic,” JT said. “Playing water polo meant accepting a role within the team.

“Things are different when you’re a coach, but the lessons and approach are the same. Every day is an opportunity to improve.”

Jamey is also coaching at the college he attended and has been doing so for the past 32 years. He coached there during his years as an attorney when water polo was a club, not varsity, sport. When the team was elevated to varsity, he quit his law job and is now at Davis spending 50% of his time as coach and 50% as lecturer.

“My parents joined Ladera Oaks, and I joined the swim team even though I wasn’t a very good swimmer. My first year at M-A I played football and thought I’d go out for wrestling in the spring.

“But I started playing water polo informally at Chris Avery’s house. His dad, Bert, had put goals at either end of the pool. I swam and played water polo at CSM and then at Davis. I identify myself as a water polo player but had some good successes at swimming, too.

“Coach Rich Donner at CSM was like a professional coach. He was so precise. We had a reunion a few years back, and he still had stats from every workout he oversaw. What attention to detail. Not many of us can live up to his standard!”

Continuing the M-A aquatics tradition, JT has a player from the high  school, senior Emily Dorst whose father, Chris, also played at M-A and Stanford. A couple of years ago we talked to him about playing in the Olympics for the first time at age 28.