Denied in 1980, Chris Dorst plays goalie and medals in water polo at 1984 Olympics 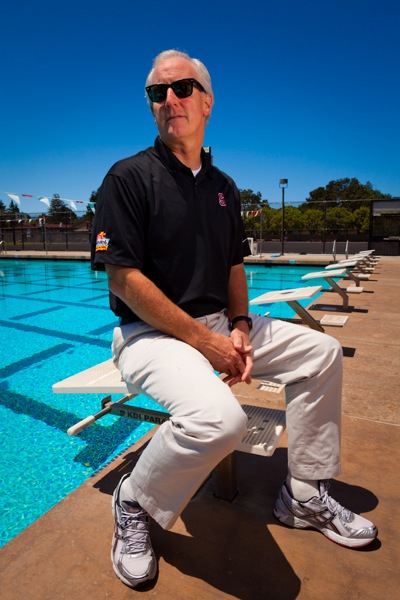 Compared to fellow Menlo-Atherton High School grads Anne Cribbs and Dick Roth, who both competed in the Olympics while teenagers, Chris Dorst was an old man of 28 when he played goalie on the men’s water polo team which won the Silver Medal in 1984. His Olympic journey was also a bit more circuitous.

During a poolside interview at M-A, Menlo Park resident Chris talked about being around pools all of his life. “Swimming was a reason to have a hot dog after the meet,” he says. He gravitated to water polo because it was a team sport, more like football, basketball, and baseball.

“Looking back, I realize that I approached water polo in a series of steps,” he says. “I had good coaches — Harvey Corbin and Roger Baer — and at every level, I’d think, ‘Can I play at the next level?'”

Chris made the Olympic team in 1980. Then President Carter announced that U.S. boycott. “I grew a beard and figured I’d shave it off when things got resolved,” he recalls.

The boycott held, and no Americans competed in 1980, and Chris, already a Stanford grad, enrolled at his alma mater’s business school. “I didn’t train for two years,” he says. 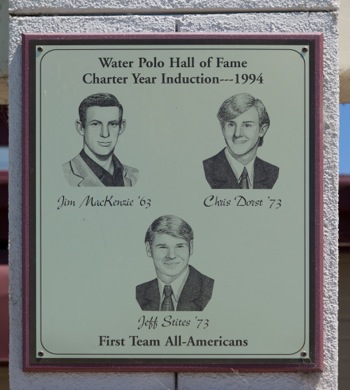 Then 1984 loomed. “Getting back into shape was painful,” he says.  “I’d work out at Stanford. The only place we could lift weights was with with George Haines and the women’s team. I ran the steps at Stanford Stadium. We were playing games against the best northern and southern California teams.

Chris’s water polo team earned a silver medal at the 1984 Olympics in Los Angeles, ceding the Gold to the Yugoslavs in a game decided by goal deferential. “Looking back I still think, ‘How could a schmuck from Menlo Park get to his level?’ Nothing really prepares you to participate in the Olympics.

“We lost to the Yugolavs but never lost a game. We won seven and tied one. Looking back, I see us on TV looking kind of glum. But we played our hearts out.”

Fast forward to the 1996 Olympic Games in Atlanta. Chris Dorst stood in the Carter Center, with a chance to meet the President who’d denied him what might have been his best chance at Olympic Gold.

“I admit it still bothers me,” he says, “and I remember that a bunch of us resolved that if Carter came out and said something, we’d leave. But we didn’t get the chance. Looking back, it’s like getting a beautiful piece of chocolate cake and not getting any frosting. That said, if being denied one Olympic opportunity and then getting another is the worse thing that happens to you, you’re doing all right.”

Footnote: Inducted into the first class of the M-A swimming/water polo Hall of Fame, Chris currently works in the Stanford Athletic Department. His wife, fellow Stanford alum Marybeth Linzmeier-Dorst, made the 1980 Olympic swim team but missed making the 1984 team by three hundredths of a second. The couple’s three daughters all play collegiate water polo at Division One schools.

it goes on and on. Peter Galli swam with JT and knew Jamey at Ladera Oaks, played water polo at Woodside, then UOP, where JT was his coach.
Now his daughter will play at Davis next year under coach Wright. Galli plays masters for Olympic club and the senior age group team has won world masters at least 4 times, beating the Russians last year in Montreal for 50+ team.