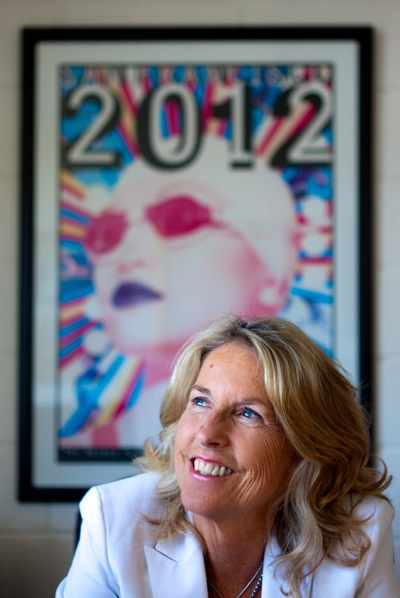 “We were kids with green hair and red eyes,” recalls Olympic Gold Medal swimmer Anne Cribbs of her experience at the XVII Olympiad held in Rome in 1960. “It was during the Cold War, and we’d been brought up to think of the Russians as scary people. But, there we were together in the village, just kids — even though most of us were in high school and they were in the Russian Army, which is what you did if you were good at something in the Soviet Union during that era. I don’t think any of us looked at the Russians in the same way again, thanks to our Olympic experience.”

Anne, a graduate of Menlo-Atherton High School who today owns a consulting firm, admits she loves the Olympic Games and what they stand for — the celebration of the human potential. “Every four years we watch the Summer Games on TV and see athletes celebrate sports and the pursuit of a common goal,” she says. “It’s the way we would like the world to be.”

Anne did not have a particularly auspicious swimming career, being initially afraid of the water. Then, Jim Gaughran taught her to swim. She was just a little girl but remembers something about her teacher saying he’d competed as a water polo player in the Olympics at Melbourne, Australia in 1956. Maybe a seed was planted.

Her mother had other ideas, according to Anne. “She wanted me to be well-rounded and got me involved in a lot of sports,” she said, adding that in the 60s — well before Title IX, which marked its 40th anniversary this year — only swimming and tennis were open to girls.

When she was eight years old, she swam in her first race at Burgess Pool in Menlo Park, wearing, she recalls, “a suit with a little skirt on the bottom and a bathing cap with a chin strap.”

Enter famed swim coach George Haines into her young life. “He always expected a little bit more than we could give, and we ended up giving it,” she says. “He was an incredible influence in my life, well beyond the pool.”

By the age of 12, she recorded her first nationally-ranked time and subsequently started breaking American records. “When you’re a kid, it’s really fun to be an American record holder,” she says.

At the 1960 Olympic games, 15-year-old Anne and her teammates won the gold medal in the 400-meter medley relay, and she placed 5th in the world in the 200-meter breast stroke. And that was that. There were limited opportunities in college for women, and none of the endorsement deals that keep women swimming decades after their teenage years today.

In 1984, Anne got involved again with the Olympics, this time with soccer. She’s continued to advocate for women in sports, including co-founding the American Basketball League, the first women’s professional basketball league. Today she is president and CEO of the Bay Area Sports Organizing Committee. While her competitive swimming career was shortened, she has few regrets. “I do sometimes think of how fast I could have swum if I’d continued to swim,” she says.

The 2012 Olympic Games are one of the most highly anticipated events on TV. I remember my mom made sure that we watched them whenever they were on growing up. I’ve come to discover that I’m an Olympic junkie and I’m pretty excited for things to get started tomorrow. I’ll be missing most of the games since I’ll be at work but I just upgraded to the Hopper. The Hopper comes with 2 terabytes of space for recording which is fantastic. That’s four times more space than your average DVR. That way I won’t have to clear stuff off of my DVR right away. A Dish co-worker recommended it to me after she tried it for the show Once Upon A Time. I hope Team USA does well this year. I think it’s awesome that Anne still advocates for women in sports. She has been an inspiration for lots of young women and swimmers alike.

Technically, Anne could not bring a gold medal at home in 1960, because she swam in the relays only for the heats, halping to qualify her team in final, and did not swim the final. In 1960, they did not give medals to the swimmers who, like Ann, were only in the qualifications. The rule has changed many years after, in he 1990 I presume. In the 200m breaststroke, she finished 6th and not 5th. But this was a very honorable placing!!