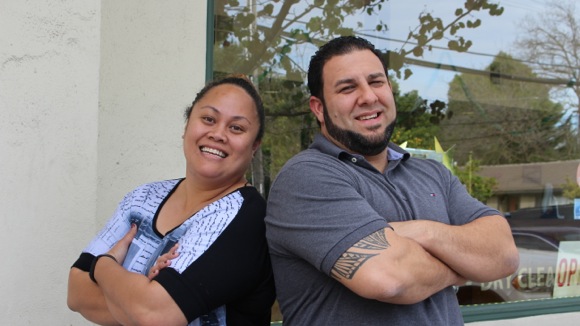 Menalto Corners is a small, local business community tucked away in the Willows neighborhood of Menlo Park that has become part of the fabric of the neighborhood. After a rough year, a wonderful thing has happened — something very much in keeping with the area’s family-friendly vibe: Menalto Corners now boasts a husband and wife who own adjacent businesses. Erik Ybarra, the new proprietor of West Bay Cleaners, moved in right next to his wife Nona Ybarra, owner of Captivating Dance by Nona and coach of the Menlo-Atherton Dance Team.

Nona was initially drawn to the commercial strip after Be Yoga relocated. She rented the small studio and began running some of her classes and rehearsals there. Many of Nona’s dancers live close by, and quite a few were already customers of some the other businesses, such as Café Zoe, Habibi’s Hair Salon, La Hacienda, Twig and Petals and Studio Cake.

When the larger corner space became available, Nona was able to rent it as well and transfer more classes over to the area because she now had enough dance space for her diverse, multi-age students and company members. Her husband, Erik, opened A Step Above, a dance-oriented clothing, shoe and accessories shop in the front of the original studio space.

Erik quickly realized how nice it was to be around his wife and her students in such a warm environment. The couple and their three kids then moved to Menlo Park. Erik notes that though he’s lived in the Bay Area all his life, he’s “never felt more at home or part of a community than in this town.” He enjoys being part of the close-knit neighborhood, participating in National Night Outs and spending as much time as possible at Menalto Corners with his wife and children.

While away for a brief family vacation this winter, Erik and Nona got a chance to talk about their future goals. He mentioned an interest in trying his hand at running the dry cleaning business next to her studio. In her typically supportive and upbeat fashion, she told him to “go for it!” Upon their return, Erik called Patrick Farris, the landlord who owns half of the storefronts in the development, including Nona’s larger dance studio. Because of his strong community ties and willingness to work hard to keep a dry cleaning business afloat in the Willows to serve the community, Patrick agreed to make a deal with Erik.

Nona and Erik are running two very different businesses, and they try not to step on one another’s toes. Yet, they are one another’s closest confidantes, and now see each other more than ever. It is great for their three kids as well. As their ten-year-old son notes, “I can help my Mom with classes and then go out and do deliveries and pick-ups with my Dad. I am learning how hard they work for what we have.”

Erik loves the family-oriented working environment, the ability to look out for his wife and her dancers, and the chance to interact more regularly with members of the community. This year, the dynamic duo of Menalto Corners will celebrate their thirteenth wedding anniversary and they feel very lucky indeed.