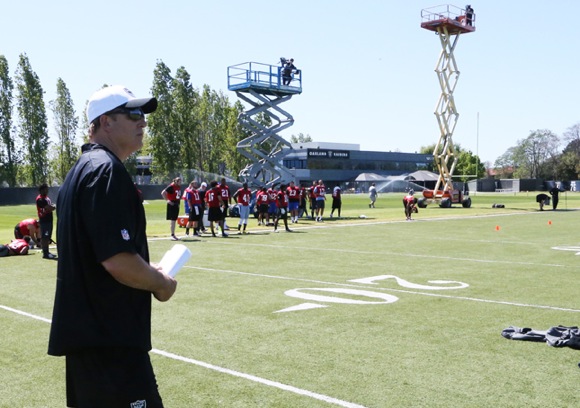 As college seniors around the nation turn their eyes to their caps and gowns, Matt “Teddy” Silano, who grew up in Menlo Park and played football for the Saint Francis Lancers and then played at Colorado Mesa for four years, had three very unexpected invitations as the school year drew to a close. 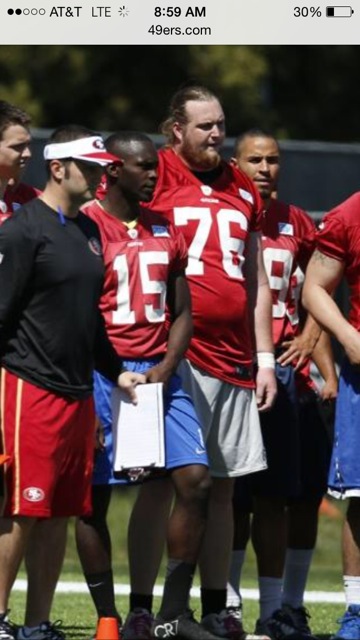 This past January, the 6’8”, 317-pound left tackle was invited to participate in the USA Football Senior Bowl in Jackson, Mississippi. USA college football bowl ranked him as 2014 USA College Football D-II Pre-Season All American and 2014 USA College Football D-II Player of the week All American. He played the entire game and let no sacks occur, much like he played while at Mesa, where he wore number 71 and started all 11 games in 2013-2014 and 2012-2013.

Next, Teddy received word the he had been invited to the San Francisco Forty-Niner’s Pro Day in Santa Clara, California (photo, right, #76). The elite event allows only 55 NFL draft-eligible prospects from the Bay Area a chance to showcase their skills for pro scouts and coaches.

The following day, Silano received word that he had also been invited to participate in the Pro Day for the Oakland Raiders (top photo, in background just to the right of coach). By all accounts, Teddy performed well at both Pro Days. He has returned to Grand Junction, Colorado to prepare to graduate in May with a Bachelor’s Degree in Criminal Justice.

While the invitation to the 49er Pro Day was a surprise, so was the fact that fellow Lancer Poppy Livers, who went on from St. Francis to play football at Villanova, had also been invited. The two enjoyed a chance to catch up on the field at the 49er SAP performance center at Levi Stadium.