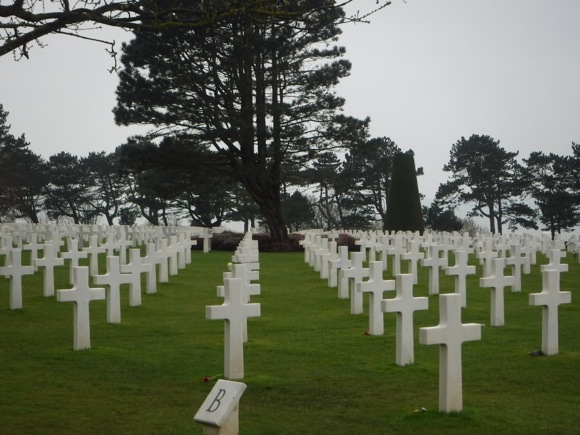 In April, we visited the invasion beaches in Normandy for the first time. On a trip that featured sunny skies and unseasonably warm temperatures throughout, it rained. That seemed fitting.

Those of us who grew up in Menlo Park in the 50s and 60s shared a common bond. Almost all of our fathers had served in World War II. For us early baby boomers, that war had immediacy. Few of our fathers talked about their experiences, but whether they’d served in Europe or in the Pacific, they were lucky enough to return home alive and begin life again on the Peninsula.

The Normandy American Cemetery contains the graves of 9,387 military dead, most of whom lost their lives in the D-Day landings and ensuing operations.  It’s on the  site of the temporary American St. Laurent Cemetery, established by the U.S. First Army on June 8, 1944, and the first American cemetery on European soil in World War II.

On our visit, we walked the beaches and climbed up to various points where other military actions took place. Following the footsteps on the windswept beaches and bluffs, we could only imagine the bravery — and the horror.

On this Memorial Day, we remember all those who served their country.

Remember with awe… it is hard to imagine what our forefathers went through – we are all so grateful for their unbelievable sacrifice.