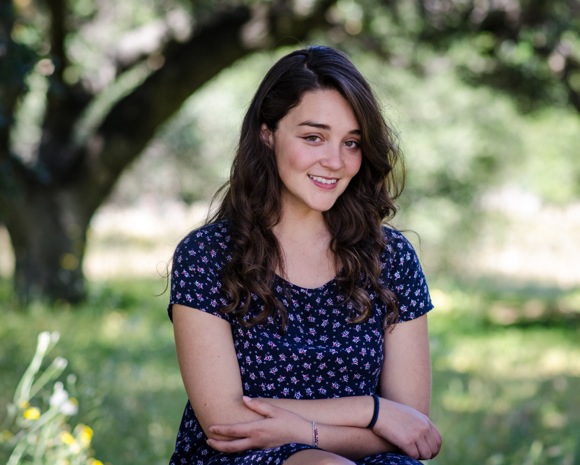 We’d journeyed over to the Stanford campus to interview Amy DuBose, a senior who grew up in Menlo Park, attending grade school in the Los Lomitas District and high school at Sacred Heart Prep. We’d heard that she was starring in the Stanford Theater & Performance Studies (TAPS) production of EVITA. Given that artistic pursuit, we were caught off guard to learn she was majoring in the combined degree of science, technology and society (STS).

“When you combine science and tech with society, there are a lot of implications,” she explained. “Viewed singularly, you can miss the interactions.”

But we returned quickly to her experience in musical theater, which the mezzo soprano has been active in since she was about 10 years old. “I was in some Peninsula Youth Theatre productions and  took voice lessons,” she said. “Musicals have always been my favorites.”

While at Stanford, Amy spent two years as part of the a cappella group, The Harmonics and last year appeared as Eponine in the Ram’s Head production of Les Misérables.

Recipient of the 1979 Tony Award for Best Musical, EVITA tells the story of Argentine First Lady Eva Perón and her rapid ascent from poverty to fame and power. This re-imagined TAPS production of the rock opera draws on historical photography, cinematography, and previously untold stories of Eva Perón.

We were curious how Amy juggles finishing up her senior year with a role she describes “as the biggest part I’ve ever played.”

“Going to rehearsal is work that I most like doing; it’s where I want to be,” she said. “But it is very demanding. There are only two or three numbers that I’m not in. It’s such an amazing challenge, and I’m working in ways that I didn’t know I could work!”

EVITA will be performed at Memorial Auditorium on the Stanford campus on May 28, 29 and 30. Tickets are available online.