Rebecca Dines looks at her career on stage – in particular, at TheatreWorks 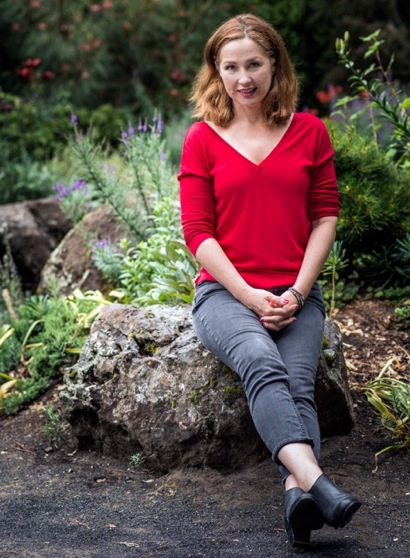 Talking to actor Rebecca Dines in person or seeing her on stage in the current TheatreWorks production, Fallen Angels, it’s hard to believe she was once painfully shy. But that’s her story and she’s sticking to it.

“[Growing up in Australia] my Mom, who taught voice and communications, got me started by teaching me some poems that had been passed down by a family friend,” said Rebecca, sitting in the Atherton home she is staying at during the run of the Noël Coward play. “She didn’t teach me with a view of turning me into a professional actor, but rather because I was so painfully shy, so much so that I hid behind my Mom’s legs.

“Then she entered me into an eisteddfod poetry competition. You chose poems to learn and recite, and each child got 50 cents and a certificate. She said to me, ‘See the sky didn’t fall in.’ And, to my surprise, I was kind of good at it.”

Rebecca moved to the States permanently in 1989, settling in the Bay Area until 2000 “when I moved to the LA area for love, not TV or film.” Fallen Angels is the 19th TheatreWorks production she’s appeared in. One of her favorite roles was that of Alexa Vere De Vere in As Bees In Honey Drown, for which she received a Critics Circle Award.

“It’s not just because that’s where I met my husband,” she said with a smile. “It’s a phenomenal part for a woman, incredibly engaging and fun.”

While Rebecca has appeared in films and on television, her passion is for theater. She’s performed in a wide variety of productions, spanning comedy to drama and classics to contemporary.

In Coward’s Fallen Angels, Rebecca plays Jane, who along with best friend Julia (Sarah Overman) ponder the opportunity to take a “lapse” from their marriages in light of  their husbands being away and a shared old beau in town. They discuss their options over martinis and champagne leading to comedic results.

“I get a kick out of doing period style comedies, and of course, it’s a Noël Coward play,” she said. “There’s a certain style to the writing. It’s about the language, the rhythms of the dialogue, and, in the case of Fallen Angels, there’s a lot of physical comedy. We get to do things that are much less frequent in roles for women and that makes it a lot of fun.

“That’s the joy of performing on stage. You get to play wonderful roles in incredible plays by brilliant writers!”

Fallen Angels, which is directed by Robert Kelley, runs through June 28 at the Mountain View Center for the Performing Arts, (500 Castro St., Mountain View). Tickets are available online.