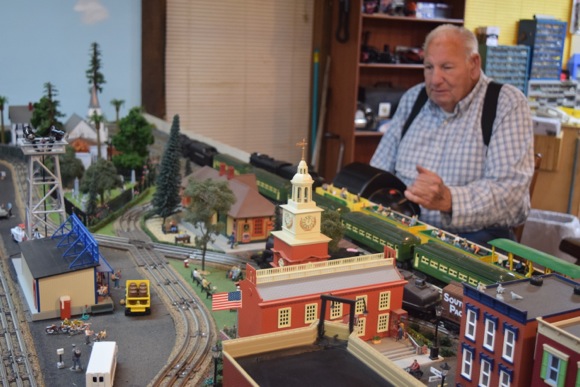 Editor’s note: Debbie (Morris) Evangel let us know about her father’s model train table, a conglomeration of memories from Menlo Park and Redwood City. She writes: “He grew up in Menlo on Live Oak and ECR and met my mom in Redwood City, so the places he frequented growing up and in married life we incorporated on his table.”

Here she recounts his life story and talks about the train table. We thought it a fitting tribute to share on Father’s Day. 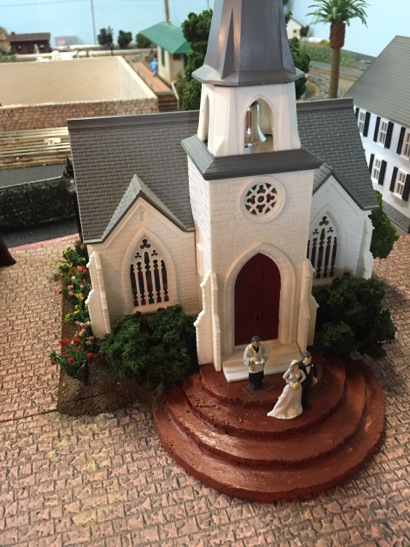 “Frank A. Morris was born to Mary Arellanes Morris in 1928. Mary lived at 671 Live Oak in Menlo Park but decided at the last minute to travel to San Francisco to visit family. It was there Frank was born.

“Mary was divorced from Frank’s father and had become engaged to Jose Garbez just before he was born. Frank grew up in Menlo Park as Frank Garbez (since Jose was the only father he knew). Some had come to call him Frank Garby. It wasn’t until he was 16 that he found out his last name was Morris.

“He went to Central School only to check in for the head count and would then leave to work. It was the Depression and both of his parents were deaf mutes which made finding work harder for them. Work became the most important thing to Frank to help out the growing family. 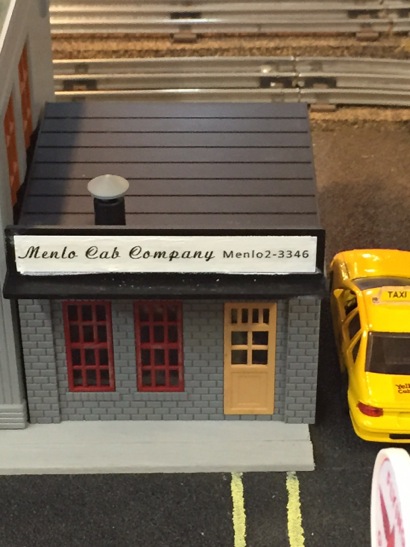 Frank grew up and worked in Menlo Park from birth until 21 when he married my mother Marilyn Brown in 1949. She was born in Redwood City. Mom worked at Mr Hot Dog, and its there they met. They moved in and out of Menlo during their marriage until finally moving to San Jose in 1959.

When my mother passed away in 2004 my dad felt a need for a hobby. He dug out the trains he had given my brothers for Christmas and started setting up his own city made of memories. All the places he loved, was familiar with, and frequented he wanted on his table.

“The Idle Hour bar (also known to the locals as “the bucket of blood” due to the frequent fights), McLoughlin’s shoe repair, Cattaneo’s gas station, Menlo cab where he worked and Menlo Train Depot where he and his friends used to hang out at. 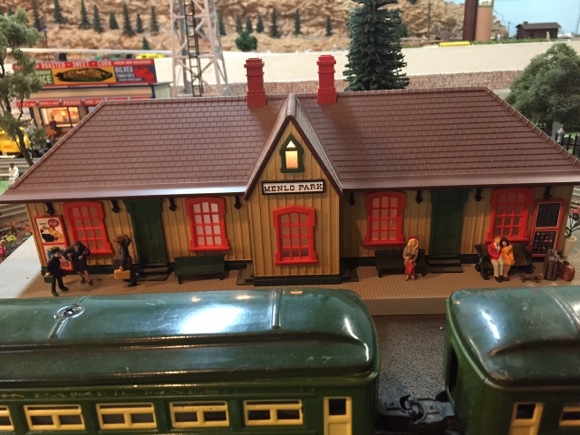 “His train layout is housed in his closed down restaurant (The Furrows) he and my mother opened when they left San Jose in 1978 and moved to Gridley, California. I often find him in the building looking at his train layout smiling as he mentally goes from one building to the next remembering the good ole days.

“My father Frank Morris is 87-years-old, and I never get tired of hearing his stories about Menlo Park.”