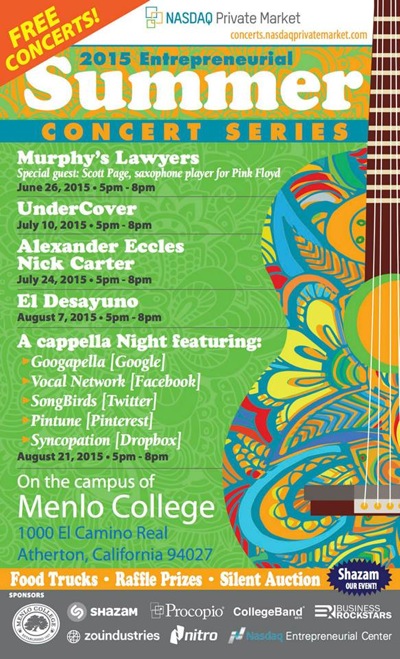 Five bands ranging from pop to rock to improvisational Latin jazz to a cappella will be featured at Menlo College during a series of free summer concerts.

The NASDAQ Private Summer Concert Series at Menlo College will include a mixture of live music, food, and fun. Each concert will also include a celebrity MC, food trucks, giveaways, free parking and more.

“We hope to welcome everyone in the Silicon Valley community and the immediate Atherton and Menlo Park areas for great music and great food in a welcoming environment on our campus,” said Richard A. Moran, president of Menlo College.

The series ends on Friday, August 21, when a cappella group Googlepella from Google, The Vocal Network from Facebook, and the Songbirds from Twitter, among others, will perform. Other bands: Undercover (7/10); Alexander Eccles/Nick Carter (7/24); El Desayuno (8/7).