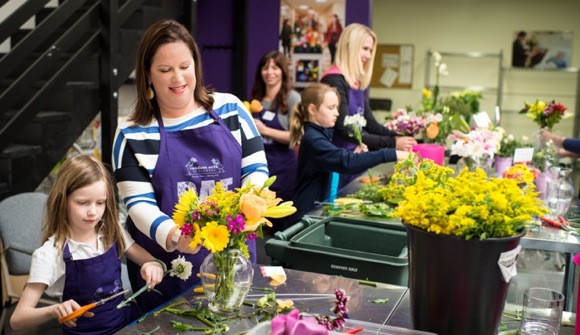 We met Gillian Growdon, Board Chair of Random Acts of Flowers Silicon Valley, at a place that smells sweet. The local branch of the national organization has office and warehouse space in Menlo Park, and the Wednesday afternoon we visited, a crew of adult volunteers, sprinkled with a few kids, was arranging bouquets to be delivered to individuals at local senior care facilities.

The organization recycles and repurposes flowers from events — weddings, funerals, fundraisers — as well as from retail outlets where the flowers have reached their shelf life — at least by the stores’ standard. “We have a whole deconstruction process,” Gillian explained. “And we always find useable flowers that are good for at least another five days.”

Gillian learned about the organization through a meeting with its founder; both share ties to Knoxville, TN. She’s lived in Menlo Park for 15 years, and like many others, is far away from her family.

“Our growth model is to start branches in areas of influence,” she said. “I was out here, and the founder and I had experienced an immediate connection.

“Being involved in RAF makes me feel like I’m helping someone’s mother or grandmother. My own mother is in the late stages of Alzheimer’s, so for me, it’s a pay it forward opportunity.”

The Silicon Valley branch opened on May 1 and had done 1,000 deliveries by mid-June.. “We always want to be clear that we aren’t replacing retail florists,” said Gillain. “We are taking something unwanted and bringing new life to it.

“I view us as a gateway organization that can help people develop a commitment to service. We’re hoping to engage kids as well as companies holding team off sites. There are lots of ways to get involved besides arranging flowers. People can donate vases or volunteer to deliver the bouquets.”

On Thursday, July 16 from 4:00 to 7:00 pm, there will be an opening party at Kick’s new sister store, No. 6 (883 Santa Cruz Avenue; entrance across from Draeger’s). A portion of the proceeds from shopping on July 16 and 17 will be donated by store owner Lee Murphy to Random Acts of Flowers.