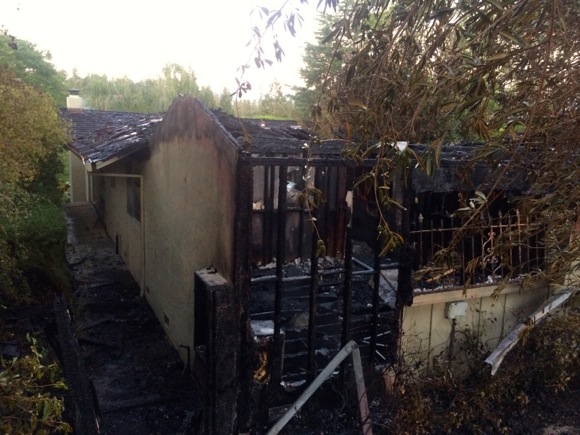 A passer by called in to report a structure fire at 3:16 am this morning on Trinity Drive in the Sharon Heights neighborhood of Menlo Park along the golf course.

Menlo Park Fire Engine 4 arrived at 3:22 am, reporting a well-involved structure fire with heavy fire coming out of the front of the building. Fire was visible through the roof with a partial collapse of one corner of the building.

Battalion Chief Dan Coyle called for a second alarm at 3:27 am due to the heavy fire involvement, potential for rescue, and concern for the fire spreading to other structures due to a fence fire and smoldering tree. In total, six fire engines, two ladder trucks, and two Battalion Chiefs responded for a total of 30 personnel from the Menlo Park Fire District and the neighboring fire agencies of Woodside, Redwood City, and Palo Alto.

“Fortunately, we don’t have many fires up in the Sharon Heights foothills, but those we have are always a concern because they have a significant fire spread potential,” said Fire Chief Harold Schapelhouman. “The size and type of structures located on hillsides and the relative close proximity to one another among large trees can quickly spread a fire. A very fast response time along with aggressive firefighting helped to keep this fire to the building of origin”.

The fire was brought under control at 4:12 am, but firefighters remained on scene to mop up hot spots, overhaul the structure and support the fire investigation.

The 2,500 square foot residential structure was being remodeled to add another 700 square feet of space. The split level home sustained extensive damage inside and out. The structure was not occupied at the time of the fire, and no firefighters were injured.

Preliminary investigative analysis points to electrical wiring as the potential cause of the fire with structural damage estimated at $750,000 and contents loss of $250,00 for the total of a million dollar combined loss.