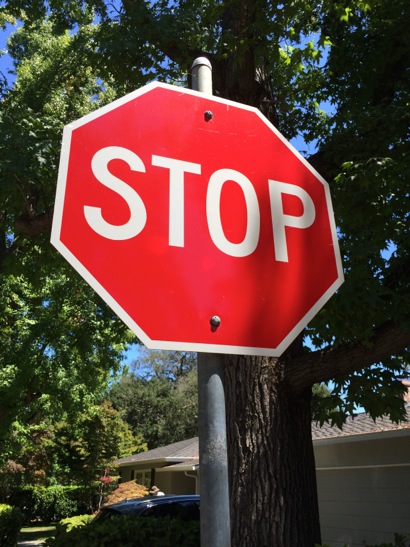 A not unusual thing happened this morning: Four of us — two adults, child and dog — were one foot into a crosswalk in downtown Menlo Park, and the driver in the approaching car not only didn’t stop for us pedestrians, he didn’t stop at the stop sign.

We’ve noticed this increasingly over the last year or so. Drivers are in a hurry and, for some, at least, that means not coming to a stop or yielding to pedestrians. So, we weren’t surprised this morning, particularly as it’s a crossing near Draeger’s which does appear to confuse people as to just where the stopping place is. For the record, it’s at the actual stop sign, not 10 feet back as some people assume.

The story didn’t end there, though. On our return trip, which was about 30 minutes after the car/pedestrian encounter, we stopped at the playground at Fremont Park, giving our four-year-old grandson an opportunity to play on the apparatus. There, a man approached us and said this: “I really want to apologize that I didn’t stop for you guys earlier. I wasn’t sure where to stop but should have stopped for you no matter what. I’m a father and I feel badly.”

To say we were astounded is an understatement. But it was a moment of civility that we thought would be good to share in the hopes that others, too, remember, that courtesy still exists.

Alas a footnote: Went to the corner near my house to take stop sign photo, crossing at two different crosswalks with stop signs. In both instances,  the driver came only to rolling stop and didn’t yield to me as  a pedestrian.

I think it gets worse every week. I see the “rolling stops” all of the time.