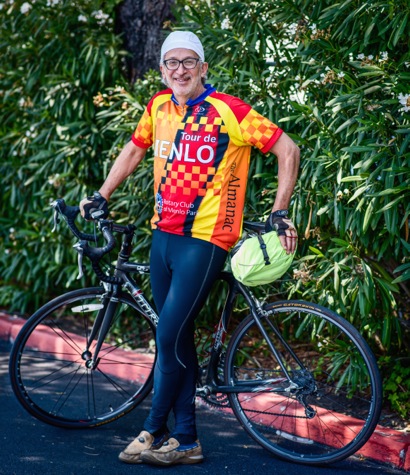 Portola Valley resident Brian Greenberg started cycling about eight years ago. “It was way easier on my body than tennis,” he says. He rides everyday, logs 70 to 100 miles a week, and gets a good workout by climbing Old La Honda and Alpine Road frequently.

As he’s done a half dozen times before, he’ll be among the participants at the Tour de Menlo scheduled for this Saturday, Aug. 22. Sponsored by the Rotary Club of Menlo Park Foundation and the Almanac, the ride began in 2004 with the current of 65-, 46- and 35-mile course options adopted in 2008. The ride starts and finishes at Menlo-Atherton High School.

Recalls Tom Gibonney, former editor of the Almanac and current Rotarian about the ride’s history: “Dick Givens and I were looking for a Rotary project in 2004 and came up with a bike ride that club members could work on and the Almanac could publicize. We had several unsuccessful versions (including 5000 feet of climbing in 50 miles!) before we had a good meeting of interested Rotary members and came up with the current format.

“Ever since, we’ve attracted about 500 riders and raised thousands of dollars for Rotary scholarships and the Almanac Holiday Fund. None of this would be possible without help from Rotary members, the Almanac’s parent company Embarcadero Media and our many sponsors.”

Brian plans to do the 65-mile ride, succumbing, he says, to “peer pressure” given that it’s a longer than usual distance for him.

He’s a Tour de Menlo fan for a number of reasons, citing the beauty of the route and the companionship. “You meet the same people year after year,” he says. “They’re mainly local.”

In addition, proceeds from the ride provide funding for programs at Menlo Park-based InnVision Shelter Network where Brian serves as Vice President, Programs and Services. “We were one of 10 organizations to receive grants of $17,000 each from last year’s ride,” he said.

Sums up Brian: “This is the only organized ride I do each year. The sponsors are great, the ride is fun, and it supports the community.”

Details about the routes and registration are available on the Tour de Menlo website.