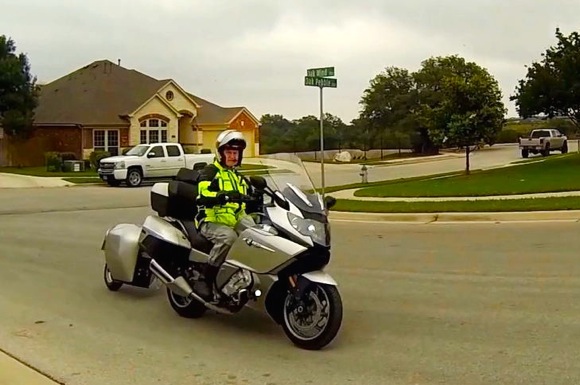 Tom Stapleton, who graduated from Menlo-Atherton High School in 1965 and now lives in San Antonio, devised a very novel approach to inspire classmates to attend their 50th reunion this fall. He hopped on his motorcycle — nicknamed the Princess and the Pea — and covered 10,000 miles in 40 days doing video interviews with classmates that he posted on YouTube and on his blog site.

“I interviewed about 102 people, about a quarter of the still-living classmates,” he said. “I was in 11 states and two provinces in Canada. 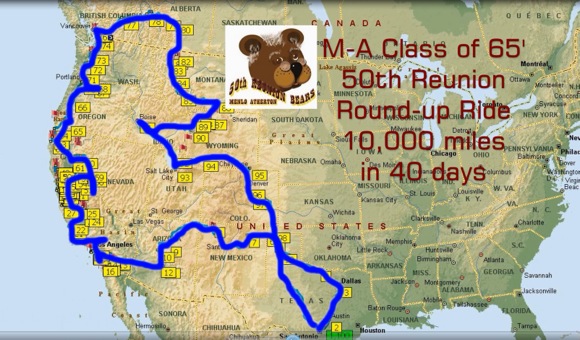 “I added nostalgic music and old photos. It was great to see my classmates in their own environments.

“The videos really helped increase the class chatter about the reunion and about 60 signed up thanks to watching them or being interviewed. There was a real emotional connection.”

Adventure is not new to Tom. After graduation he attended the California Maritime Academy and spent 43 years in the maritime industry, at sea for 26 years, and a ship captain for 15. His interest in motorcycles began while in high school, when he bought his first bike from classmate Gordy Gourdin.

Tom’s classmate Kirby Roberts Riggs had nothing but high praise for his efforts: “Tom’s brother Frank initiated the idea  for his M-A reunion. Tom’s creative contribution was with his GoPro camera in videoing classmates and having them share their stories.

“Classmates loved this inside peek before the reunion, and it really did bring onboard several more classmates who otherwise would not have attended. The ride was a huge success and ignited a fire of interest for our 50th reunion!”