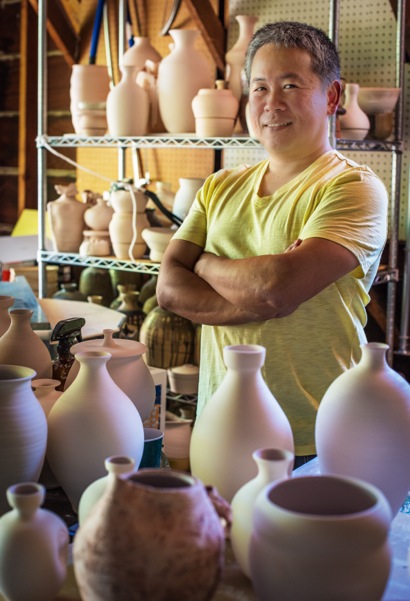 Ceramics and applied physics. That’s not a marriage of disciplines that would pop up in most people’s minds. But the two pursuits are front and center in the life of Menlo Park resident Hideo Mabuchi.

Hideo is a professor and department chair of the Department of Applied Physics at Stanford University. “My scientific research tends to be esoteric, focusing on quantum optics — laser science and the applications of lasers in areas such as IT and biophysics,” he says

A long-time collector of Japanese ceramics, he started making ceramics himself just a few years ago. Explains Hideo: “I thought it would be fun to make things. But then when you get interested in something, it quickly becomes a major hobby. I sell only incidentally. Mostly it just hangs around in the corners of our home.”

Make that many corners, as a visit to his home attests. His work fills many a nook and cranny — and most of his garage.

Hideo works mainly in clay, which he wood fires at a Mendocino art center. “You need a crew tending it around the clock for two to three days, so you generally do it with one or two other ceramicists,” he says. “You need to add wood every 10 minutes. It gets pretty hot — 2,400 degrees.”

Getting involved in ceramics has prompted Hideo to think about how he might merge his hobby with his work at Stanford. “I’m interested in the connections between science and craft,” he says. “Crafts people have a very hands-on understanding of fire. They know how to get the results they want.

“Conversely, at the undergraduate and graduate level, applied physics is getting more and more abstract and theoretical. That got my wondering if we should be bringing crafts back to physics and engineering.

“So, this Spring, we’ll be offering a class for scientists and non-scientists that will involve ceramics work and the studying of firing techniques. A kiln has been built on campus, and we’ll be looking at what goes on in the kiln.”

We ended our conversation with Hideo talking about becoming a MacArthur Foundation fellow in 2000 when he was 29 years old.  “The biggest impact, for me,  is the people you met through the program,” he said. “Sure, there was the affirmation to continue to do what I thought my life’s work would be, but I got to meet artists, writers, social workers. I’ve kept in touch and will be going to Cuba with a group of Foundation alums in October.”