by Harold Schapelhouman on September 11, 2015 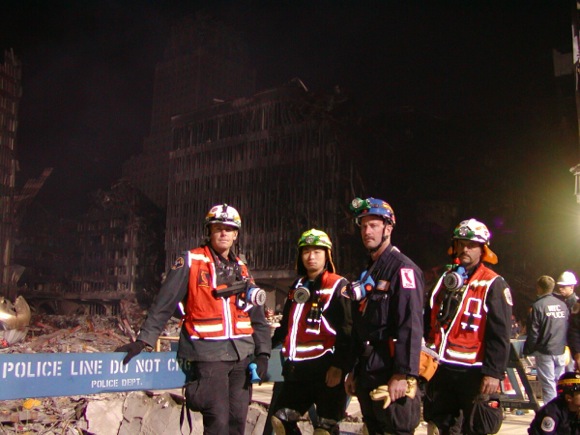 Most Americans can tell you exactly what they were doing on September 11, 2001, when they first saw or heard about the attacks on the World Trade Center. Most of us recall the tragic consequences of that day, memories only tempered by unbelievable stories of heroism, sacrifice, and service to our nation.

But did you know that a local group of 67 highly-trained rescuers were deployed within days after the attacks to New York City by the Federal Government — and stayed longer than any other Federal Rescue Team, spending 13 days in New York, much of it at the World Trade Center Plaza?

Or that their first mission, shrouded in secrecy, would be to rebuild a rescue capability for the City of New York within 24 hours because the threat of further attacks was believed to be so probable, immediate action was required?

Exactly 24 hours later, New York City had re-acquired a Technical Rescue Capability under armed guard at Fort Totten in Queens. Working under the direct supervision of the FDNY those Bay Area rescue workers were the new front line of defense for New York City.

With an average of 500 building collapses per year, all of its technical rescue equipment and personnel killed, injured, destroyed, damaged or committed at WTC, FDNY and the Office of Emergency Management (OEM) turned to the Federal Urban Search and Rescue (US&R) System for help.

Staffing those units were members of California Task Force 3, a Bay Area Urban Search and Rescue Team based out of Menlo Park comprised of firefighters from throughout San Mateo and Santa Clara Counties, as well as civilian professionals such as doctors, engineers, dog handlers and communications specialists.

Sponsored by the Menlo Park Fire Protection District, the Task Force, created after the Loma Prieta Earthquake in 1989, consists of 225 members that have been involved with disasters all over the country, including Hurricane Katrina, the Oklahoma City Bombing, Space Shuttle Columbia disaster and many other incidents including the San Bruno gas main explosion and the Washington state mud slide last year.

Many people talk about not forgetting 9/11. We can’t. We lived through part of it!

If you’re interested in our story you can find it online. We will be building a memorial for next year’s 15th anniversary with a portion of the plaza that was brought home by the team and stored in a garage for the last 14 years.