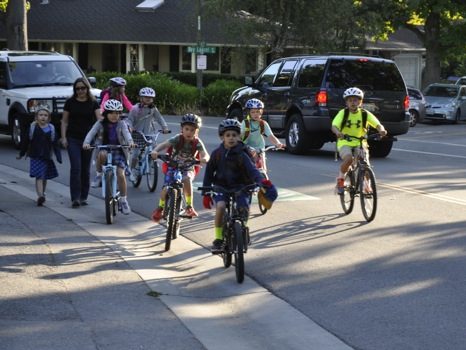 Editor’s note: We received enough emails from readers about what they perceive as an increasingly unsafe downtown Menlo Park along with an assortment of traffic-related gripes that we scheduled time to talk with Commander Dave Bertini of the Menlo Park Police Department and Nikki Sagawa of the city’s transportation department. Below is an edited version of those conversations.

InMenlo: Residents are concerned about the increasing number of homeless people in downtown Menlo Park as well as the organized begging. What actions are being taken — or not?

Commander Bertini: The city is a magnet for the homeless and for people making a living getting hand outs. The Department of Justice ruled recently that criminalizing sleeping on the street is a violation of the Eighth Amendment. So, we don’t make arrests unless there is criminal activity involved. That said, we’re about to launch a homeless outreach program.

Panhandling is a touchy issue. The stores don’t want to kick the panhandlers out from the front of their establishments because they’ll be perceived as heartless. But the worst thing you can do is give them money. You’re enabling them — the more you do it, the more they will come.

InMenlo: We’ve observed and hear from other residents the increased incidence of talking and texting while driving as well as both motorists and cyclists running stop signs. Your comments?

Commander Bertini: I run at lunch, and I’ve almost been hit three times by motorists ignoring stop signs. When we put a patrol officer at trouble spots, of course, everyone stops.

Cyclists are required to stop at stop signs, and we will cite cyclists who do not. Some are of the opinion that the vehicle code doesn’t apply to them, but if they want to share the road, they need to obey vehicular code.

All of our officers are on the watch for distracted driving. The police department has gotten a grant from the Office of Traffic Safety that addresses the issue specifically.

Nikki Nagawa: When we get complaints in problem areas, we ask residents to trim bushes so that the stop signs can be seen better. We’re repainting some crosswalks, and not related to stops specifically, we’re adding green sharrows on some streets.

A sharrow is a “shared lane marking” which means there is not enough physical space in the roadway to accommodate two-way traffic with dedicated, striped bike lanes. So, the sharrows reinforce that bikes and cars should share the roadway, and the sharrow placement notes to bicyclists where they should ride to be visible and away from the “door zone” of parked cars.

InMenlo: People are concerned about the burglaries in downtown Menlo which they believe are more of a concern than what some term “overzealous” parking enforcement.

On the burglaries, perception is reality but in actuality we’ve had 18 burglaries downtown this year. There were three at Mike’s Camera, and the burglars have been caught. They kept hitting the store because, in a bit of irony, there were no surveillance cameras in place. Video cameras are inexpensive and a great help when it comes to police investigations.

We have put officers out in the middle of the night downtown on foot and on bicycle, which we believe are more effective deterrents than squad cars.

Property crimes are skyrocketing across the state and region. You can attribute that to  Prop 47, which redefined some nonviolent offenses as misdemeanors rather than felonies. Perpetrators of property crimes aren’t going to state prison; for a hardened criminal, doing county time is easy. What we are seeing is the result of that, in my opinion.

Nikki Nagaya: With partial closure of Chestnut for the temporary paseo installation, we heard feedback that the installation removed the only four-way stop on Santa Cruz. So, we added a temporary stop sign at Crane to address this feedback.

InMenlo: Commander, you’ve been with the MPPD for four years now. What’s improved and what do you find troubling?

Commander Bertini: When I joined the department, Menlo Park was ranked among the top ten worse in several categories of traffic accidents in similar-sized cities. We realized a need to focus more on traffic safety and created a crash team. We asked our citizen’s advisory board to go out and get their neighbors input and used that information to identify specific areas where we can do the most good.

We applied for and got an Office of Transportation Safety grant where officers could work over time on distracted driving, speeding, etc. Since 2011, we’ve had a dramatic 20% decrease in injury and property damage.

There’s also been a watershed of change for the positive between the residents of Belle Haven and the Department. There’s been no gang-related shooting since mid-2013.

The flip side is that I think there will be a dramatic increase in property crimes due to Prop 47, which makes it more difficult to put the bad guys away.

Wish you had enquired about the state of the traffic enforcement cameras at Ravenswood and El Camino. I’ve heard a) they are unconstitutional b) they are off c) they are on and d) Menlo Park gets a trivial percent of fines collected. Any chance this could be the topic of a follow up? Thanks, Bruce