by Kendrick Riberiro on November 4, 2015 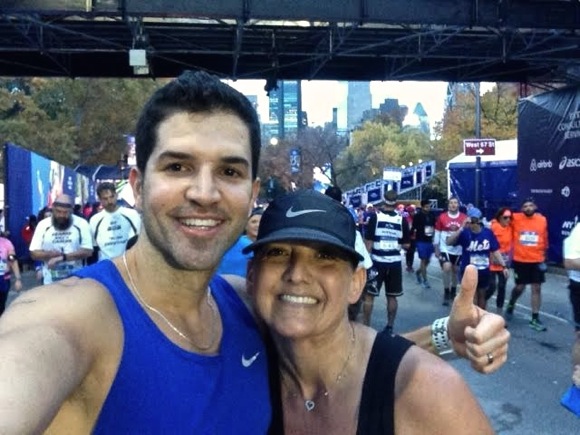 I first met Menlo Park resident Christy Ericson in the spring of 2014 when she came to my fitness studio [Studio K- Fit located at Marsh Manor] with Meredith, a close friend. She told me her goals were to lose a little weight and get into shape and asked if I could train her.

The very next week she was diagnosed with Huntington’s Disease. It’s a devastating genetic disease that has been described as Parkinson’s, Alzheimer’s and ALS, all rolled into one. It slowly destroys the brain, cuts off motor function, and inhibits the body’s ability to regulate mood and swallowing.

Where most people would sink into depression with the news, Christy showed up at the Studio ready to train. We had a serious talk, and she told me that her balance, dexterity, and physical capabilities would continue to decline. She expressed that her dream was to run the New York City Marathon and asked if I could run it with her. Without hesitation I said, “Let’s do it.”

Little did I know that over the past year, Christy would teach me so much about life and what it really means to give back, pay it forward, be generous, and put others first. She is an incredible human being and has truly made me a better person. Along the way she has demonstrated persistence, tenacity and sheer fortitude through a very hard time in her life. 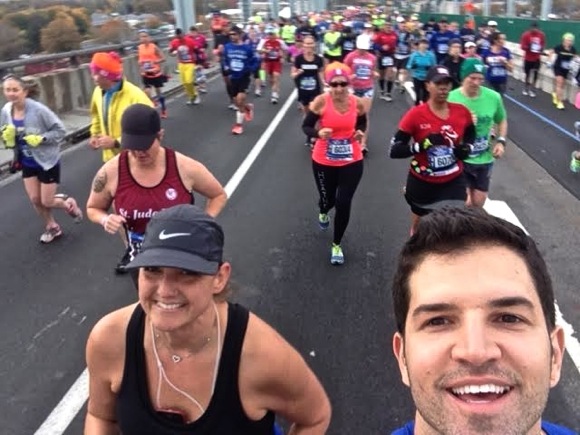 We battled many obstacles during our training. Our first training run together, she had to be rushed to the hospital. I nearly pulled the plug on the idea of running a full marathon after that incident, but Christy didn’t want to give up. She also convinced her doctors to clear her to continue training for the race.

Over the summer, it was hard for us to stay consistent with our training due to vacation time she was taking with family and friends who wanted to spend time with her before the disease got worse. One month before the race, she almost lost a foot due to a bad infection.

Our longest run before going to New York was 12 miles, far from where we should be, but she wanted to continue on because most likely she would never get another chance. I modified our race day game plan to include a walk/jog interval approach.

Needless to say, when we showed up in New York City this past weekend, we were not prepared to run a marathon. We started the race ok, then at mile 5 everything started falling apart. Christy’s right arm started to bother her, she got dizzy, and the crowd noise was way too much stimulation for her to handle. Brooklyn is not a quiet place on race day!

The adrenaline in her body had flushed out her medications that she had taken earlier and the symptoms of HD were more prevalent. (This was not something we had planned for.) I kept encouraging her and told her to focus on her breathing and to just keep her eyes on the ground (three feet in front of her). I told her to grab my shirt as we continued on. After mile 5, we started walking a lot more and I had to modify the entire game plan. We still had 21 miles to go.

At mile 8, I got shivers and heard an internal voice — something that has never happened to me before. It was our guardian angel, Mr. Bob Hays, a close family friend who passed away after a run five years ago, speaking to me. He was quick with a message: “You both are going to be just fine; she will make it to the end. Keep moving strong”.

I had tears running down my face, but felt a sense of calm after that. The incident was so surreal that I had to pull back behind Christy for a bit so she wouldn’t notice me getting emotional. Christy recently got a tattoo on the inside of her forearm that reads, “I am strong.” I looked over and relayed the message from our angel Bob. “We’re going to finish this; you are strong.”

Just like that my anxiety subsided, and we were able to get into a comfortable groove. The last few miles were hard, and she had to fight like never before. It was physically, mentally and emotionally draining.

But Christy was able to finish her dream race just before the sun went down.

The author of this post, Kendrick Riberiro, operates Studio K-Fit in the Marsh Manor Shopping Center. Photos are courtesy of him.