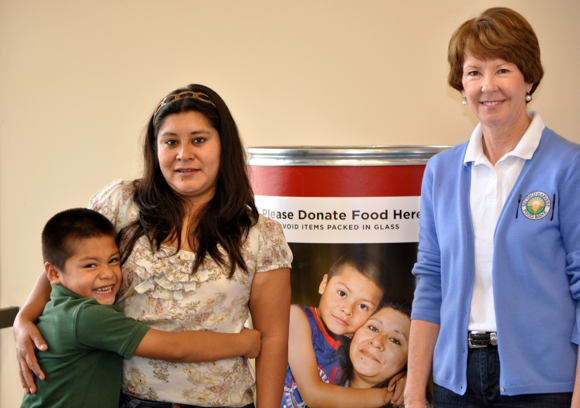 Delfina and Antonio have three kids — daughters Maritza, 9, and Itzel, 7, and son Mauricio, 6. Even though Antonio works long hours as a full-time mechanic at a local body shop, finding affordable housing and surviving in a region that has one of the highest costs of living in the nation is a daily struggle.

To stretch their limited income as far as possible, they made sacrifices. First, they rented a bedroom in a house shared with two other families. Crammed into a tiny space, and sharing a kitchen and bathroom, “We lost our privacy and didn’t have enough food to eat,” Delfina said. “There wasn’t enough space for us to properly store or prepare what little food we had.”

When the rent increased, the family moved to a one-bedroom apartment, which they still share. “We were worried and needed a place to live. It made me sad that once again, we couldn’t provide enough space or food for our kids. It hurt a lot.”

That’s when Delfina found Second Harvest Food Bank. She remembers the first time she brought food home for her family. They were amazed by the variety of fruits and vegetables, and her children loved the chicken, yogurt, cheese, milk, tuna and eggs. “Antonio and I could finally breathe because this was the kind of healthy food they need,” she said.

To help feed hungry families during the holidays and all year long, Second Harvest Food Bank of Santa Clara and San Mateo Counties is conducting the largest Holiday Food and Fund Drive in the nation. Delfina and son Mauricio are helping the effort by being the poster faces on the food collection barrels.

“It’s hard to believe that in this center of innovation and wealth, there is so much hunger,” said Kathy Jackson, CEO of Second Harvest Food Bank of Santa Clara and San Mateo Counties, pictured above with Delfina and Mauricio.

The average rent in Silicon Valley tops $2,500 a month and has risen more than 12% in the last year, which leaves less money for food each month. It takes more than $82,000 per year for a family of four to pay their bills and put food on the table.

“You combine the high cost of housing with the stagnant wages we’ve seen for those outside the high tech industry, and it spells disaster for the people we serve,” Jackson said. “The family featured on our barrels this year struggles to feed their three kids even though the dad works full-time as a mechanic. All five of them are living in a one-bedroom apartment.”

“This is a critical campaign for Second Harvest,” Jackson said. “The number of people we serve jumped 50 percent after the recession and it remains stubbornly high despite the booming local economy. Second Harvest is providing food to nearly 250,000 people every month. We rely on the generosity of local individuals and companies to ensure that anyone who needs a healthy meal can get one.”

Individuals, corporations, and organizations can help to ensure that anyone who needs a healthy meal can get one by donating to Second Harvest Food Bank or hosting a food and fund drive this holiday season. To support the campaign, visit http://www.shfb.org or call 866-234-3663. Anyone who needs food should call Second Harvest’s multilingual Food Connection hotline at 800-984-3663.