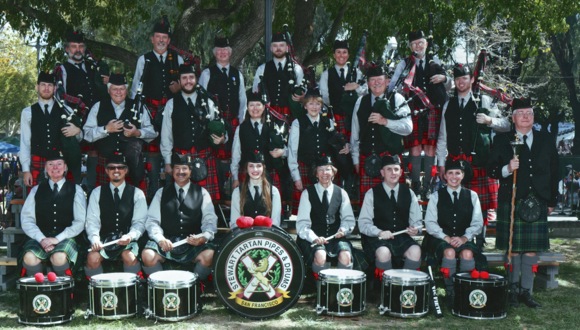 Stephen Milburn (second row, third from left in photo) got intrigued with pipe bands listening to his father’s CDs, and, when he was a freshman in high school, asked if he could take Irish bagpipe lessons. But a teacher was nowhere to be found near Lancaster, CA, where he grew up.

“But we did find a guy who taught Highland bagpipes, and I soon learned that there’s quite a community around the music and Highland Games,” he recalled. “That gave me a lot of structure in learning the music.”

Stephen joined the Stewart Tartan Pipes & Drums when he moved to the Bay Area. “It was about the time they were gearing up for their holiday concerts, which always play to a packed house,” he said.

This Saturday, the Stewart Tartans will be performing in Menlo Park for the first time in a concert at Trinity Church (330 Ravenswood Ave.) that will begin at 5:00 pm. They’ll be joined by The Piedmont Highlanders Dancers, the Peninsula Scottish Fiddlers, and  the Holy Cross Kings Brass.

“You’re going to hear a variety of Scottish and Irish music,” he said. “There will be traditional pipe and drums, marching music, Christmas music, as well as some more contemporary Scottish music on the pipes.”

The concert is free of charge, but donations are accepted. “We’ll have a couple of baskets going around in case anyone is interested in giving to the band,” Stephen said. “All donations go towards training new pipers and funding band activities.”