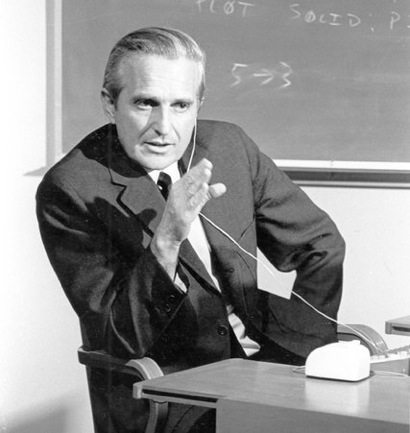 Forty-seven years ago today, the computer mouse debuted. And so did other innovations, including hypertext, object addressing, dynamic file sharing and shared-screen collaboration between two people at different sites communicating over a network.

The 90-minute live presentation of the online system, NLS, was given by Douglas C. Engelbart and the 17 researchers working with him in the Augmentation Research Center at Stanford Research Institute in Menlo Park. It later became known as “the mother of all demos,” first called so by Steven Levy in his 1994 book, Insanely Great: The Life and Times of Macintosh, the Computer That Changed Everything.

If you want to jump back in time, the original 100-minute video of this event is part of the Engelbart Collection in Special Collections of Stanford University. The full-length video has also also been edited into 35 segments and reformatted as Flash streaming video clips.

Dr. Engelbart died at his Atherton home in 2013. Those wanting to learn more about this visionary scientist may want to read his obituary in the New York Times and the bio on Wikipedia.

Amazing the innovations that developed right herein our backyard!
Thank you for posting.