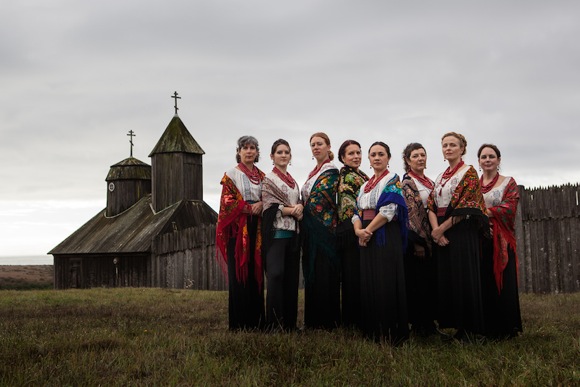 The annual Wintersongs tour of women’s vocal ensemble, Kitka, includes a stop in Menlo Park at Arts at St. Bede’s on December 13 at 4:00 pm. Tickets are $15 to $40 and available online.

“The first two Wintersongs concerts take place on the sixth and seventh nights of Hanukkah, and we are delighted to devote a good portion of our program to material drawn from the Jewish tradition,” says Kitka Executive Artistic Director Shira Cion.

“Among the Jewish pieces on this year’s program, Kitka will perform a medley of Yiddish lullabies from Ethel Raim. Now in her mid-eighties, Raim, the founding director of the Pennywhistlers (the first American group to perform folk music from beyond the Iron Curtain), is a legendary figure of Eastern European folk music in the USA. Raim’s lifelong work as an ethnographer blazed the trail that Kitka journeys upon today.”

“The Yiddish lullabies touch on some dark themes — poverty, loneliness, death — which are all aspects of the winter season, the darkest time of the year,” adds Wintersongs music director and vocalist Caitlin Tabancay Austin. “But balancing out the program are cheerful and humorous tunes like ‘Lekoved Yontif,’ a charming Hanukkah song from Belarus that invokes the healing powers of latkes, chicken soup and fish.”

Kitka will perform these pieces in both ancient, traditional polyphonic styles as well as in innovative new arrangements created by ensemble members and composers and arrangers from Kitka’s ever-expanding global community.