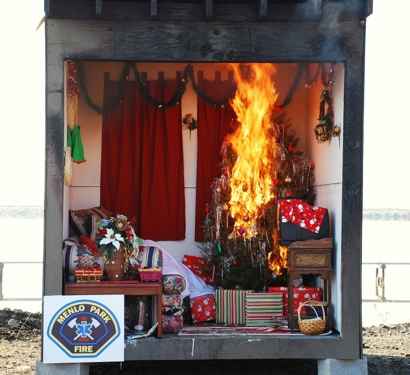 “Historically, our organization has experienced fatality fires on both Christmas Eve and morning,” said Chief Harold Schapelhouman. “In 2003, an early morning fire took the lives of two children in East Palo Alto when their Christmas tree ignited due to a fireplace that did not have a fire screen. In 2005, an Atherton man was killed when he returned from a family get together on Christmas eve and was attempting to light his pellet stove catching his clothing on fire. In 2009, eight people were almost killed when the build-up of Carbon Monoxide within their home in the North Fairoaks Area incapacitated most of them; fortunately, our firefighters arrived before it was too late.”

The simulated fires are visual reminders for residents to be diligent during the holiday season.