We caught up with Rooney Pitchford a couple of days before the official release of his first album, Familiar Places. But he’d let some folks get a preview, and he admitted a bit of relief. “I was nervous a couple of days ago, but people seem to like it,” said the Sacred Heart Prep and Stanford grad, who grew up in Atherton.

Rooney was looking ahead to a big weekend, with a performance at Sacred Heart on Friday night and then at the Bottom of the Hill in the City on Saturday night. He brought together a group of local musicians — all Stanford grads — to play the songs he wrote “almost all at once last September.”

“I’d put on a pot of coffee at night and write until dawn,” he said.

The result is 11 songs, four of which were recorded at Lost Monkey Studio in Hayward and the other seven at Rattle Trap Audio in Austin, Texas. Rooney had raised money on Kickstarter for the recording sessions. He describes his music as a little bit of country but with some soul and folk mixed in. The album is available online. 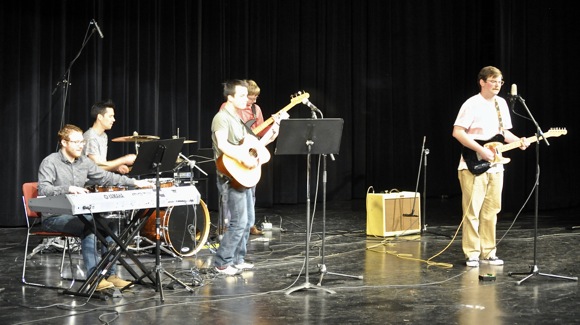 Rooney traces his interest in music to seeing Jack Black in School of Rock when he was a kid. He got a guitar the next Christmas and took lessons for five or so years before he realized the rest was on him. “You get to a point where you comprehend what you need to know and then realize how many hours of practice it’s going to take to get there,” he said with a smile.

At Sacred Heart, he played in a jazz combo where “I learned how to perform and how to improvise and how it feels to be in front of people.” At Stanford, he played in bands from time to time, but mainly just spent hours and hours practicing.

He cites Neil Young as his biggest influence, along with Sam Cooke and Otis Redding. “I don’t listen to much current music, although I do like Ray LaMontagne,” he said.

With the record release parties over, Rooney plans to head back to Austin, where he intends to stay for awhile. “I need to go back and find a band and play some gigs and figure out how to pay the bills. It’s hard to make it work but I’m going to try.”