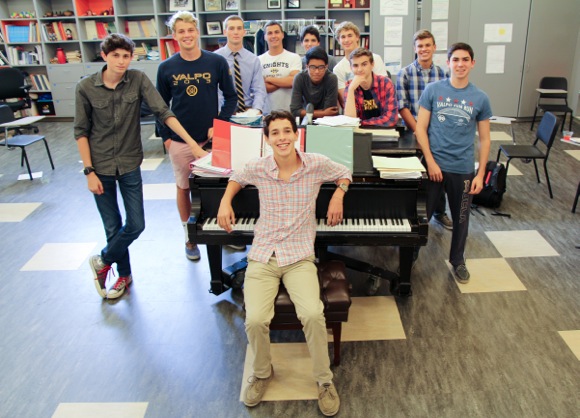 With more than decade of singing experience, Menlo School senior Lucas Loaiza was motivated by a friend to launch The Menlodies (Men of Menlo + Melodies) men’s a cappella group. Striving for an elite level of quality, he invited 10 singers and a beatboxer to comprise the inaugural ensemble. “We’ve already had a ton of fun and been very successful!” says Lucas.

The Menlodies meet three times a week to rehearse and prepare parts for performance. They also work together to make any decisions that impact the group, such as what songs they’ll sing and what performance opportunities they want to pursue.

The group has been so well received that a lot of girls were asking if they could join, unaware that it was a men’s group. This was the impetus for the creation of a mixed group as well. Lucas joined forces with senior singers Nika Kunwar and Lauren Smith, who help manage the bigger mixed group and provide some expertise in working with the female voice. This group, too, is off to a great start with more than 20 singers — an even number of girls and boys — showing up for the first rehearsal.

Lucas has dedicated an enormous amount of time and energy to getting the two groups up and running. He hopes both groups will have a chance to perform in upcoming assemblies, and says they’ll also be performing on the Student Center patio at various points throughout the year. “I’ve been having a blast with these groups, and I think all the other members have been as well!”

Lucas has been singing since he was six years old when he started with the Bay Area’s internationally recognized Ragazzi Boys Chorus. He is now a senior member of the concert group and has sung on multiple tours with the ensemble, performing in venues such as Carnegie Hall and in South Africa, Cuba, and Canada.

Lucas is also passionate about theater. He has been part of nearly 30 major productions to date. He performed the lead role in last spring’s Urinetown production and is playing the role of Brian in the fall play Avenue Q.