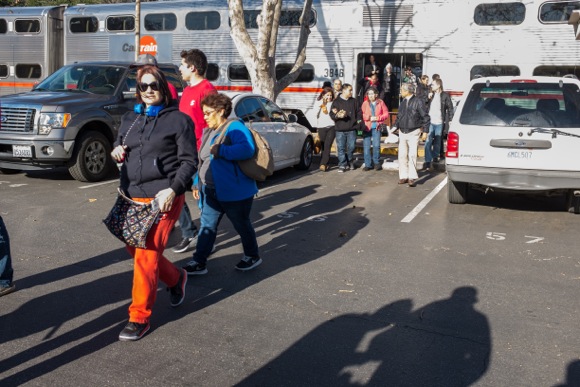 UPDATE: We just talked with Tasha Bartholomew, Communications officer for Caltrain. She told us that the bags in question belonged to a couple who was set to board the train in Redwood City. They needed to get money from the ATM and left the bags on the platform, thinking no one would bother what they described as “bags in not very good condition.” But a man snatched the bags and took them on the train. When he realized that there was nothing of value in them, he got off the train.

“It’s a bizarre story,” Bartholomew said. “Transit police responded and the train was swept just for safe measure before it proceeded on to San Jose.

Caltrain #152, had left San Francisco at 2:07 pm, was halted in Menlo Park shortly after 3:00 pm when a suspicious suitcase was reported by at least two passengers. The train was evacuated, and police from multiple agencies responded to the scene. 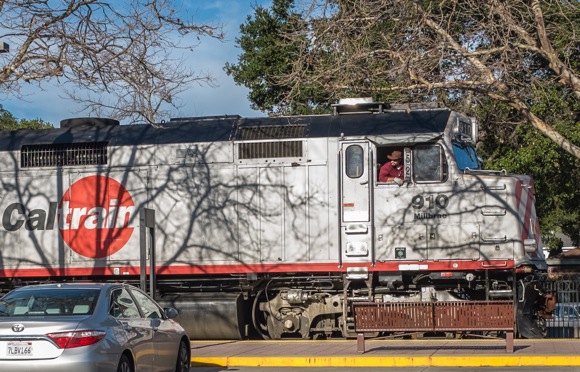 One woman told InMenlo (and authorities) that a man got on the train in Redwood City and placed a bag in the luggage rack and then got off the train. “I thought he was just going to the platform to get more bags but the door closed before he got back on,” she said. 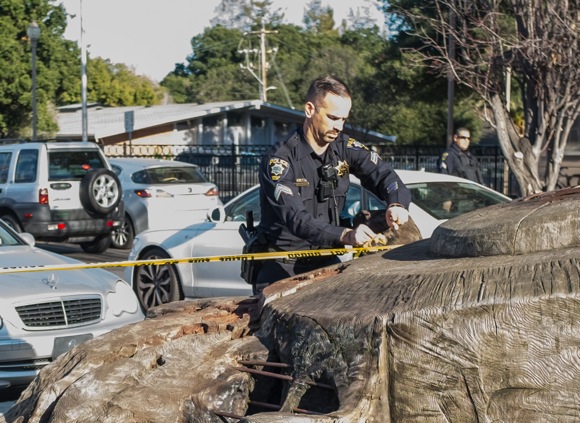 I see the SMCO Sheriff had to come to the rescue of the PD….again!

[in response to previous comment] So get your facts straight before putting down the Menlo Park Police Department. The Sheriffs Office is responsible for all law enforcement activity for Caltrain.

KSD…so why was the MPPD taping off the area??? So touchy about the MPPD…My goodness a little more tolerance here please! Maybe the MP council should contract with the SO and save the tax payers some money…it is working in HMB, San Carlos, Milbrea etc.

What a bunch of malarky!

A decade ago such law enforcement behavior would have been considered to be a waste of judgement and poor marshalling of resources. A train would not have been detained for such a long period. Now, …..such an act would be considered to be be a ‘rational’ act which could be preventing possible terrorism. Government needs an enemy to justify its existence to the masses.

MR, with all due respect, it is different times now. I’ve seen first hand what complacency will do from my experiences over seas on deployments. Not only am I a veteran, but I am also the engineer of that train. The sheriffs and PD’s response and handling of the scene was top notch and professional. Yes it was only personal items, but what if it wasn’t? The safety of my passengers is number one to my crew and I. Yes it was a major inconvenience of having to stop and have the train cleared by law enforcement, but making sure my passengers arrive to their families and destinations out weights that inconvenience.