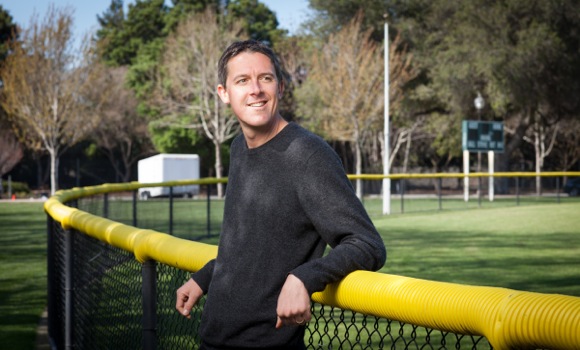 Relief pitcher Johnny Adcock, who moonlights as a private detective, is back with the publication on March 1st of Double Switch, penned by T.T Monday, known to locals as Menlo Park resident Nick Taylor, who we first profiled in 2014.

The latest baseball/crime novel follows The Setup Man, released in 2014. “When it was published, I didn’t know if the publisher would want a sequel,” says Nick. “But somehow it got read by the head of Doubleday, who said to my editor, ‘When are we going to see pages for the next book?’

“I had to put the whole story together in a matter of weeks, and when I sat down to write the first draft, I found a lot of holes in the plot that I needed to fix. I’m going to be better prepared if there’s a third book in the series!”

This time around Adcock gets enlisted to help baseball PR/marketing stylist Tiff Tate with his client, the rookie phenom Yonel Ruiz, who escaped from Cuba. The hitch: the Venezuelan cartel that smuggled him out wants a bigger slice of the action, and they’ve unleashed a ruthless assassin known as La Loba, the Wolf.

Nick says that the baseball part of his stories come easily, but less so the crime aspects. “I don’t have the background in police work, so I find myself doing a lot more probing.

“But I do love spending time with Johnny Adcock. It’s fun to think about his life. One of my friends tried to get me involved in fantasy baseball, but I told him I already had a fantasy life that involved baseball.”

Nick will be doing a reading from Double Switch  and pouring a little bubbly at Kepler’s on launch day, March 1, at 7:00 pm.