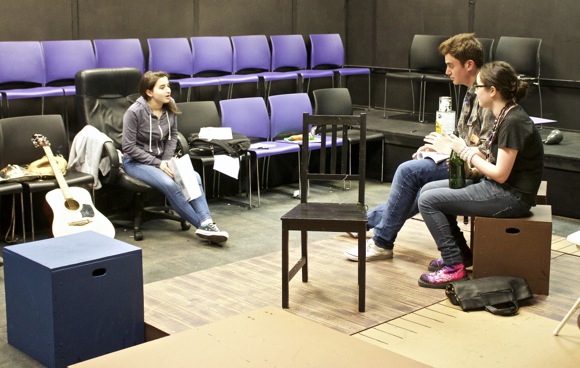 Lifelong Menlo Park resident Mia Gieduschek (pictured, left) has been interested in theater since she was in elementary school. Now a senior at Kehillah Jewish High School, she finds herself in a new role — that of director, not actor.

The production is The Shadow Box, which will be performed March 8, 9, and 10 at the school’s Black Box Theater. The play won the 1977 Pulitzer Prize for Drama and Tony Award for Best Play. Set on the grounds of a large hospital, it tells the story ofthree terminally ill patients and their loved ones as they come to terms with their illness and explores what it means to be dying — and what it means to be alive.

Mia’s theater teacher, Jim Gunn, passed away last summer. But over the course of her years at Kehillah, she’d had numerous conversations with him about this particular play. “We talked about casting and sets and lighting,” she recalled. “He would tell me ‘when you’re a senior you can direct it.’ This is really a tribute to him.

“The way the play deals with the subject matter is very real and honest. It’s been a learning experience for me and the cast, and we hope it will be so for whoever comes to watch it.”

Mia is frank that her directorial debut has not come without mistakes. She credits her stage manager for helping her along the way as well as her supportive cast of nine fellow students.

When Mia decided what colleges to apply to, she made sure they all had theater programs for non-majors, as she’d like to continue to both act and direct. “I don’t think I’ll ever stop wanting to be an actor,” she said. “But directing satisfies a different part of my creativity. It evokes a different kind of feeling.”

Tickets for The Shadow Box can be purchased online.