Guest opinion: The practice of hate – and what we can do about it 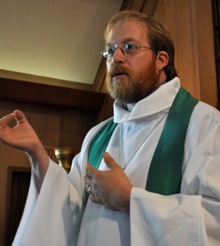 Editor’s note: The Rev. Matthew Dutton-Gillett, who is rector at Trinity Church in Menlo Park, posted this on his personal blog. We thought his observations could benefit from an additional audience.

I have never in my life known a time when hatred has been so acceptable. I cannot remember a time when politics and hatred have had such a close relationship. Hate has become acceptable in America, even fashionable. And Christianity has been co-opted to validate much of that hatred.

I don’t think I’m telling you anything you don’t already know. Wherever you get your news, there you will find ample testimony to the well-spring of hatred in our society. There is no shortage of people, from politicians to pundits to pastors, who will tell you who you should be hating and who you should be blaming for whatever it is you are angry about. And there is some recent evidence that all of this hate-speak is fomenting an increasing level of violence in our society, directed against those who are the targets of this venom.

No, this isn’t anything you don’t already know. The question is, What are we going to do about it?

Fr. Gregory Boyle, the well-known Jesuit priest who founded Homeboy Industries in Los Angeles to help people escape gang violence, talks a lot about the importance of kinship. The development of kinship is, in fact, what he says lies at the heart of Homeboy Industries, the largest and most emulated program of its kind in the nation.

Without kinship, he says, there cannot be peace and there cannot be justice. Indeed, he says, “If kinship was our goal, we would no longer be promoting justice, we would be celebrating it.” His insight is simple yet profound: it is only when we recognize our kinship, or intimate connection to others, that we can truly become interested in their well-being, including whether or not they are being treated fairly.

It seems to me that when Fr. Boyle talks about kinship, he is talking about what Jesus was talking about when he emphasized the importance of loving our neighbor as ourselves. Very often, I have understood this teaching to speak of a connection between the way I regard myself and the way I regard others. But Fr. Boyle adds another dimension to this teaching, which suggests that we are meant to see a kinship between ourselves and others.

It is not a kinship that is only to be extended to our family and friends, to those who love us and who are similar to us. As Jesus said, everybody does that. But we are to extend our kinship to the whole human family, to everyone we encounter. That is the way we become interested and invested in the lives of others, and that is the way we truly develop a genuine desire for their well-being. It is from this kinship that peace and justice truly flow.

We need to stop listening and giving privilege to those voices around us that seek to pull us away from any sense of kinship with others. Those of us who are people of faith need to insist that our traditions stop being used to justify these voices that seek to prevent us from developing kinship with one another, for these voices are out of tune with the traditions they seek to co-opt. We must dedicate ourselves to practices that nurture kinship with one another. For whether we choose to acknowledge it or not, the reality is that we all live together or we perish together.

Let us begin to say “No” to the voices that would seek to plant hatred in our hearts and souls, and begin to say “Yes” to the divine voice that points us toward the sacred kinship we share with one another.

In the end, I am convinced that this is the only path that will save us from the hatred that swirls in our midst.