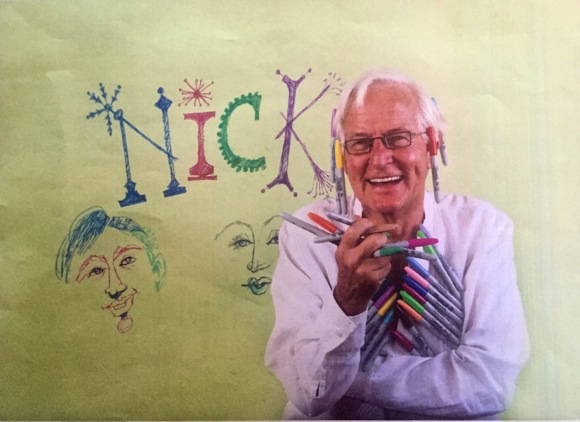 Nick Cann has always loved to draw and has done so professionally his entire adult life. But he once got dethroned as school artist of choice by Willow elementary school classmate Jerry Garcia, who, we all know, eventually chose music.

“We did draw together,” said Nick, adding, “We had pudginess in common.”

The budding artist went on to attend Menlo-Atherton High School where he remembers two great art teachers, Mr. Heidsiek and Mr. Umberger. After graduating he attended San Jose State, the Ecole des Beaux Arts in Paris, and The Art Center in Los Angeles. In 1964, he was hired as a set illustrator for MGM Studio.

“It was great work,” he recalled. “I did things like draw the interior of an atomic submarine for the movie Ice Station Zebra.”

For the past 50 years, he’s been on his own. “I think of myself as a problem solver as much as an artist. I just solve the problem with a pen.”

While keeping up his freelance business, he added teaching to his daily routine about a decade ago. “I’d never considered teaching, but I got involved with a group here in Napa and started with some fifth graders,” he said. “One student told me her mother had told her that drawing wasn’t important. I told her “that chair you are sitting in had to be drawn.”

Nick has always kept a sweet spot for his M-A days. For one, he’s married to classmate Peggy Peppard and together they attend class of ’60 reunions. “I usually do a drawing for organizer Bob Beckstrom,” he said. “Fact is I hope to never stop drawing.”

Bravo!! Any artist that actually succeeds needs a great big hug!! This one is from me. I am disabled – have epilepsy, but just moved to FL and had 2 brain surgeries in the past 3 months – so we are on the right track. I was doing medical billing (boring!!) Majored in Advertising…but right now am going to audition for a theater here. Gotta sing two songs – nervous!! But did theater at M-A and even got an award for it. Funny – I think it was my comic version of Leeza Gibbons when I hosted the senior fashion show. The principal in the early 1990’s was very sports oriented – the theater they have now I am jealous – stunning!!
Great luck to ya!! and you would love my iPhone cover – “the creative adult is the child who never grew up” LOL!!
Colleen

I recognize your name. I think you were part of the ” Junior Achievement” group that my dad mentored. My sister, Sandy Shaw was a 1962 MA grad. I remember my dad talking about what a great artist this kid named Nick Cann was going to be one day.