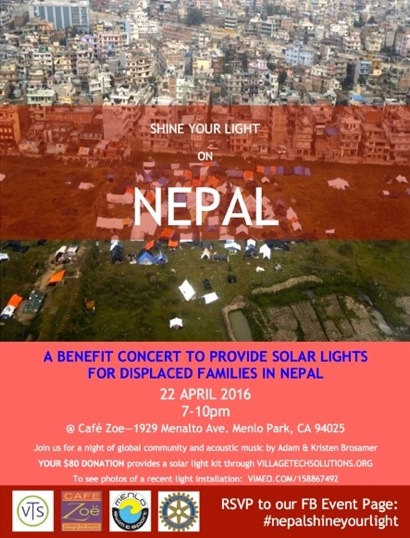 Editor’s note: We’ve featured the work of Menlo Park residents Haydi and David Sowerine a number of times on InMenlo, first outlining how they started their Nepalese-based non-profit, Village Tech Solutions followed by an update about their work in the area of village Internet-availability in 2012, and their collaboration with Menlo School students in the summer of 2015. David emailed us about a current local initiative:

“Our former Nepal manager, Nandu, delivered 145 solar lighting systems to 145 families in a desperately poor quake tent camp a few weeks back. We raised the dollars to pay for that.

“I mentioned this to Kristen Brosamer, a young friend in my Boot Camp. She asked for the project’s photos and quickly produced the video “Providing Lights in Dhading Dhansar March 2016” that you can see on the VTS website.

“Nandu has another 240 of these solar systems in his inventory, which he’s installing at his cost. We hope to get them all into tents as soon as possible.

“Kristen and her husband Adam also offered to put on a fundraiser, which is scheduled for Cafe Zoe on April 22. More details are on the poster.”