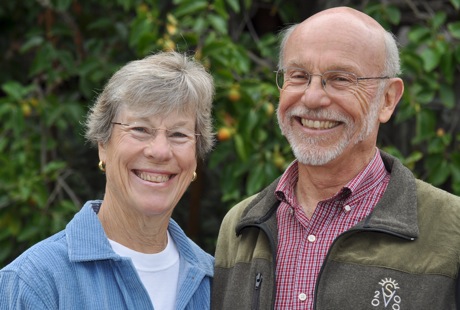 After their combined household of children finished high school, Haydi and David Sowerine left the comfort of their home in Menlo Park for what they thought was going to be David’s three-to-five year USAID contract to promote agri-business in Nepal. But just 18 months into the assignment, the government eliminated first David’s team – and then David himself.

“Some Nepalis begged David to stay and said they would help us with visas,” recalls Haydi. “Much to USAID’s surprise we elected to stay on – we were the first who had ever done that.”  The Sowerines spent the next 13 years in Nepal, returning to Menlo Park in 2005.

They went to work on a variety of projects including a solar-powered educational TV kiosk for villages and a privately-run landfill to solve the waste disposal problem of the Kathmandu Valley. But continued government corruption stalled both.

“It was then that we formed our private business to provide energy and transport solutions for rural people,” said Haydi. “Eventually we devised the WireBridge.”

WireBridges – human-powered, wheeled carriages riding on cable strung between anchor towers – help solve the isolation of villages posed by Nepal’s geography by spanning river gorges. Each carriage holds up to five or six people and their goods. Through the Sowerine’s efforts 34 bridges were  installed.

“There are probably 1,000 potential bridge sites with villages which have no funds to purchase them,” said David.  “We had hoped to have steady funding for the villages from one of the bigger aid agencies but that has been a stalemate for the last four years. So we will try to raise funds in the US – one bridge at a time.”

In addition to the WireBridge, they developed a human-powered generator and electricity distribution setup. Pedaling the generator proved to be “socially unpopular”  but a new system that has a small solar panel, battery and LED lights is being produced.

At the end of last year, the Sowerine’s manager of more than 10 years formed his own company (Village Solutions) and will be the bridge builder and light distributor. To support these efforts, the Sowerines started a 501(c)(3) nonprofit called VillageTech Solutions (VTS).

‘While we lived in Kathmandu it was easy to persuade young engineering volunteers to join us, and to organize their work to be really productive,”,said Haydi.  “Now that we live in highly-developed Menlo Park, the innovation machine requires a different form, something like a conveyor belt. And with good fundraising support for VTS, we intend to push new products and technologies along.”