For Kehillah High School juniors, it’s a tradition to take a three-week class trip to Israel. We recently travelled up and down the entire country, from Jerusalem to Tel Aviv to the Syrian and Lebanese borders. Having lived my entire life in Menlo Park, I came back having much to reflect on in the way that country operates and the differences and similarities between Israel and the United States.

The most surprising thing I learned is the Israelis do not live in constant fear of terror attacks. Because of the headlines we see, it’s easy to think of Israel as an unsafe place to live, but that is not what I found or felt. It surprised me to see that most of the people living in Israel go about their normal lives and do not let threats or attacks affect them.

One reason they are able to do this is because of the mandatory military service and military presence always on the streets. If the residents were to openly live in fear, then the terrorists would be encouraged to continue attacking them. In addition, by not restricting families from going to places where terrorist attacks have taken place, it creates a safer atmosphere for all.

Our class also had the chance to talk with some Arab-Israeli teens. We talked with them about everything from our common taste in music to what they think of the Israeli Prime Minister. One conversation that we really got into with them was about college and how different it is in Israel from the United States. One of the high school boys we were talking to, a junior like us, was already taking classes at the Technion, one of the most famous universities in Israel. The other teens told us that this was not common and said that, “if you take a college level course in high school you are seen as a genius.”

We asked them if they knew what AP classes were, something we are all so used to in the Bay Area. When we told them that it was essentially a college level course in high school, they were very surprised at how closely college is integrated into the American high school system. This was something I had never thought about before. 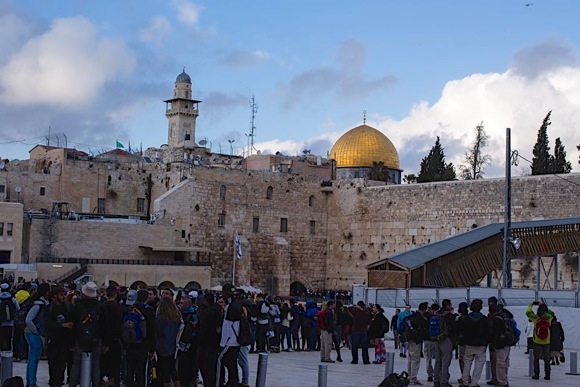 On Friday night, Shabbat, my classmates and I got the chance to walk to the Western Wall in Jerusalem (pictured above) and celebrate with the 500 plus people that were there. At the Western Wall, there is a main plaza where people walk around and gather together singing and dancing. The wall itself is divided into men’s and women’s sections where people pray, write notes, and unite in dance.

I was taken aback to see all of these people — teenagers and adults — dancing, singing, and opening up the circle for anybody, because they were just so happy that it was Shabbat. I asked our tour guide if this was something that happened every Shabbat or if it was something special. When he told me that this was the typical Friday night in Jerusalem, I felt so inspired.

I tried to think if there was anything similar that people did in the Bay Area and I was stumped. Every family has its own traditions and people do go to church on Sunday or synagogue on Friday night, but there is no place where everyone comes together, all religions and races, in dancing and prayer every week.

My trip to Israel changed my perspective on many things that I’ve been thinking about for awhile and offered an incredible opportunity to experience another country’s culture.   As I hang out at Cafe Borrone on a Friday night, the closest thing we get to a communal experience in Menlo Park, I have plenty to reminisce about and ponder.

Photos courtesy of Lauren Kelmar; top photo shows the group on a radish farm where they picked two tons of radishes to be delivered to the poor

You could try Lindy in the Park on Sundays, it is in Golden Gate Park on JFK drive near the DeYoung Museum from 11am – 2pm. Best of all, it’s free!