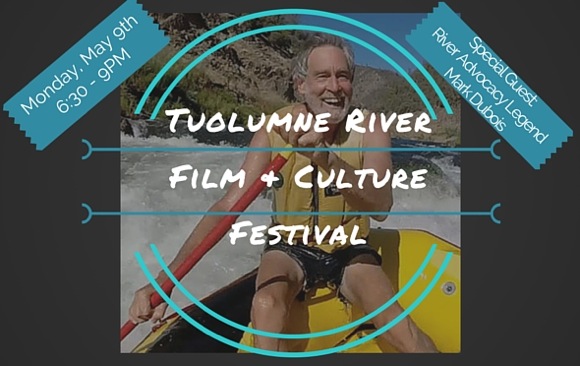 This year’s Tuolumne River Film and Culture Fest will feature Mark Dubois, a long-time environmentalist who is familiar to many on the Peninsula from his stint as International Coordinator of Earth Day 1990, headquartered in Palo Alto. That year more than 200 million people in 141 countries participated in the first international Earth Day celebration.

Prior to that campaign, Dubois made headlines as a river advocacy legend. As Co-Founder and first Executive Director of Friends of the River, he led the campaign to save the Stanislaus River from being dammed. In 1979 he received national attention by chaining himself to a boulder in the river canyon to prevent it from being flooded.

Although his action stalled the project for a year, eventually the River was inundated by the New Melones Reservoir. Last summer, drought conditions lowered the level of the reservoir, opening up nine miles of what was once the most popular river run on the West Coast. Dubois took his first trip down the River with others since the River was lost, and the journey was documented in a 2.5-minute piece produced by Craig Miller of KQED.

The 2nd annual Tuolumne River Film and Culture Fest will be held on May 9 from 6:30 to 9:00 pm at the Menlo Atherton Center for the Performing Arts, 555 Middlefield Road in Atherton. This year’s theme is “A river lost, a river saved, and the battles yet to come.” Tickets are available in advance online.

Kicking off the event will be a performance by the Tuolumne River Ukulele Orchestra, followed by Last River Lost, a short documentary about the Stanislaus River campaign produced by Christian Kallen of Healdsburg. The title is appropriately named, as the Stanislaus campaign changed the political landscape, leading to protection of the Tuolumne and other California rivers. No major dam has been built in the state since.

A Vigilant Tuolumne, produced by Leah Rogers of Menlo Park, will touch upon how the Tuolumne is gaining ground with restoration, but the watershed and associated groundwater basin are under usage pressures. Also shown will be an excerpt from Fire Next Time, a documentary about the Yosemite Rim Fire that burned 400 square miles in the Tuolumne River Watershed in 2013.

Looking to the future, an excerpt from Tales of the San Joaquin, produced by Christopher Beaver of Marin, will set the stage for the next big river campaign. The San Joaquin River was recently named the second most endangered river in the United States by American Rivers, a national conservation organization. Current efforts to revive the San Joaquin and it’s tributaries, of which the Tuolumne is the largest, offer hope that we can bring back to life this magnificent waterway and the Bay-Delta downstream.

Musical acts will include original songs by Nancy Cassidy, a Palo Alto resident who was involved in the Stanislaus campaign, and Chinese Melodrama, a Half Moon Bay-based duo. Claudio Ortega and Hugo Wainzinger will sing a Spanish river ballad, and the finale will add to these musicians a Palo Alto-based pianist, Larry Chinn, in an audience sing-along. There will be a reception afterwards.

The Tuolumne River is the source of drinking water for 2.6 million Bay Area residents, including those on the Peninsula. The River fills the Hetch Hetchy Reservoir in Yosemite National Park, and the water travels by gravity 160 miles to the Bay Area where it serves 25 cities and two private water distributors.