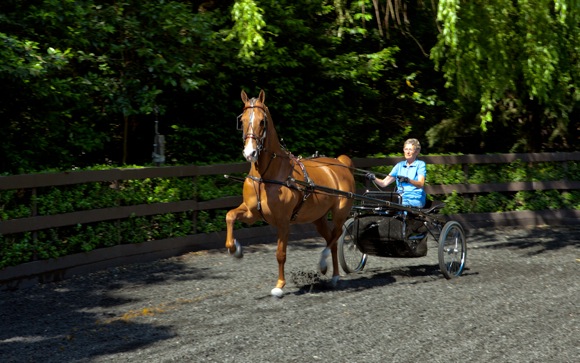 Woodside resident Nan Chapman, who served as the first female member of the Atherton City Council and was involved with the Menlo Charity Horse Show since its inception, died on May 9 from lung cancer. A memorial service will be held on Wednesday, June 8, at 4:00 pm at the Menlo Circus Club (190 Park Lane, Atherton) with a reception to follow.

Nan is survived by her husband of 57 years, Ron; her son, Doug (Reno, Nev.) and numerous nieces and nephews. In lieu of flowers, the family asks for donations to the Lowell Alumni Association, the Junior League of Palo Alto/Mid-Peninsula Endowment Fund or the charity of the donor’s choice.

While in grade school in San Francisco, Nan became friends with Betsy Glikbarg, and the two co-founded the Menlo Charity Horse Show in 1970. It was Betsy who Nan called upon to be her campaign manager  when she ran for Atherton City Council in 1980. In advance of the first campaign, rather than going door-to-door to get the needed signatures, they hung out at Draeger’s in Menlo Park where they knew so many patrons.

We got to know Nan over the years through her involvement the Menlo Charity Horse Show, which she very ably publicized. We admired that a press release from Nan required very little editing and no fact checking. She was one of the spunkiest people we were privileged to encounter via our work on InMenlo. In 2012, we visited with her doing what she loved most, being involved with horses. That interview is re-published below.

Nan Chapman rode her first horse when she was seven. His name was Ranger, and he was housed at an Atherton home near the corner of Atherton Ave. and El Camino Real, often referred to as the “Dupont House.”

“My mother said the most expensive mistake she ever made was buying me my first riding lesson,” she says. “When I got married, she told my husband that I’d get over horses.”

She, of course, did not. While she didn’t own her first horse until she was 40, she showed other people’s American Saddlebreds in pleasure and pair classes. “The breed was originally a plantation horse,” she says. “They’re bred for speed, appearance and endurance. You can ride them or drive them.”

Before moving to Woodside, Nan lived for many years in Atherton. She was active in city governance and volunteering. She served on the City Council and was mayor twice. She was involved with the Junior League, Family Services, and Vista Center for the Blind. Her longest volunteer stint may be with the Menlo Charity House Show, which she’s been involved with for the past 42 years. Today, she also concentrates her energy on the Horse Park in Woodside and the Folger Barn.

Nan says the great thing about staying involved with horses is that as you age, you can “downgrade” by riding a less spirited horse or adopting a new activity. She’s done the later and now shows 12-year-old Jackie (whose registered American Saddlebred name is A Day on the Town) in four or five pleasure driving classes a year. “You can always find the mount or discipline that fits you,” she says. “I have no plans to quit, although I may be in a lead line class some day!”