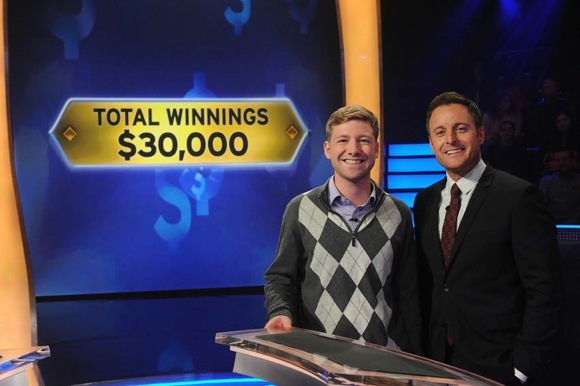 Menlo-Atherton High School grad Patrick Reed didn’t walk away from his appearance on Who Wants to Be a Millionaire with millions but is happy to be $30,000 richer.

As reported earlier on InMenlo, last weekend was momentous for Patrick, with the episode of Millionaire airing on Friday and graduating from American University on Saturday with a degree in International Studies.

“The experience was surreal,” he said. “Here I was on a game show that I used to watch when I was a kid!”

Patrick explained he sort of stumbled into appearing on the show: “My roommate and I were watching videos of old game shows when we learned that Millionaire was holding auditions in Baltimore.

“I decided to go for it. There were about 25 people there, and first we had to take a written trivia test. I scored in the top 10, so was interviewed. They wanted to know more about each of us, and what we’d do with the money if we won a $1 million. I told them I’d take a driving trip with my girlfriend across Europe from Madrid to Moscow.

“Finally, they did a mock filming where they asked us practice questions. They coached us on how to speak up and things like that.”

The next step for Patrick was waiting to hear if he’d be selected. The news was good; he was told if he could get to Connecticut with two weeks notice, they’d put him on the show.

He explained that the way the show works is that each contestant gets questions of increasing difficulty. If they answer 14 in a row correctly, they win a $1 million.

Patrick will visit with his folks in Menlo Park before heading off to Europe, albeit solo as his girlfriend got a job. He then plans to settle in Washington, DC, and pursue a career in the foreign service or diplomatic corps.