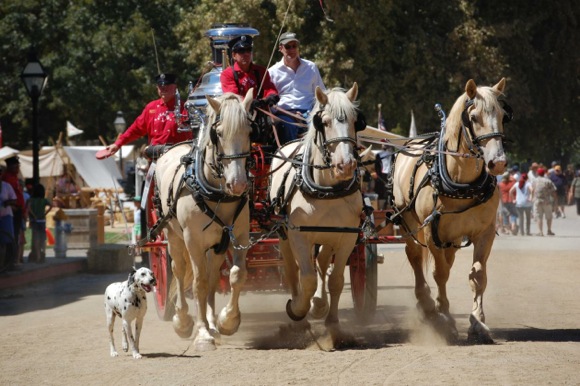 The Menlo Park Fire District’s 100-year anniversary parade is being held on Saturday, May 21, starting at 10 am on Santa Cruz Avenue. Among the highlights:

– The Fire District’s 1899 Hose Wagon will be pulled by a team of two horses, the first time in 25 years that has occurred. The Hose Wagon is the oldest piece of fire equipment once used by local volunteer firefighters. Few remain in the Country in actual original condition.

-This is the last year to see the California State Firefighters Association (CSFA) 1901 Steam Engine with its Team of three horses. Few Steam Engines exist and those that do can only be found in Museums on display, not in a parade.

-The Redwood City Fire Department will be bringing its 1862 Cowing Hand Pumper. It will be towed on a trailer but it is one of the oldest known hand drawn units of its kind.

-Modern Fire Equipment like Menlo’s new Engine 4 and other agencies will add at least another dozen modern pieces of firefighting apparatus.

-Other public safety vehicles from law enforcement, Emergency Medical Services, Red Cross and PG&E will fill out what will be one of the largest public safety parades and displays ever in the Bay Area spanning over 150 years of hand and horse drawn equipment along with over 100 years of motorized fire equipment.

All of the vehicles will be on display at City parking lot A, located between Santa Cruz Avenue and Oak Grove Avenue across from Fire Station 6 on Hoover Street from 11:00 – 3:00pm with public safety information booths and demonstrations.

At 1:00pm, the CSFA Steamer will be fired, this rare and unique display is a must see event because it rarely occurs any longer. Menlo Park Firefighters will provide a modern look at what a Fire Engine is capable of at 2 pm and children are welcome to safely spray some water with firefighters help.

The Fire Districts 100-foot aerial Ladder Truck will show its capabilities at 2.30 pm rounding out what will be a memorable, family friendly day.