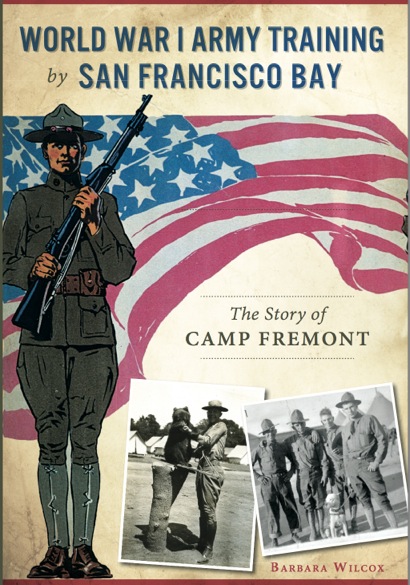 Local historian and author Barbara Wilcox will talk about Camp Fremont and its legacy and sign copies of her new book, World War I Army Training by San Francisco Bay: The Story of Camp Fremont, at the Menlo Park Library on June 11 from 1:00 to 3:00 pm.

During World War I, Menlo Park and Palo Alto were home to the Camp Fremont Army Training Base for a short but productive period. Many residents now live on a patch of the former camp’s land, which occupied over 7,200 acres and accommodated over 20,000 personnel. Some locals have backyard relics or family stories of Camp Fremont.

“I’ll have new maps of Camp Fremont on display made by Will Lee, an architect for US Veterans Affairs in Menlo Park who has been active and helpful in uncovering Camp Fremont’s history and promoting the centennial,” emailed Barbara.

“I’ll talk about Walter Hoag, the unsung father of Menlo Park whose office still stands today on El Camino. I’ll talk about how the camp helped create today’s Menlo Park by providing the future downtown with the needed sewerage.

“And I’ll talk about Camp Fremont veterans who later became war heroes, like Lt. Maud Campbell Davison, the World War II POW nurse played by Claudette Colbert in So Proudly We Hail and Cpl. Harold W. Roberts, who received the Medal of Honor for his valor in the Tank Corps in the Meuse-Argonne.”

Sorry to miss the talk. I’m looking forward to reading the book!