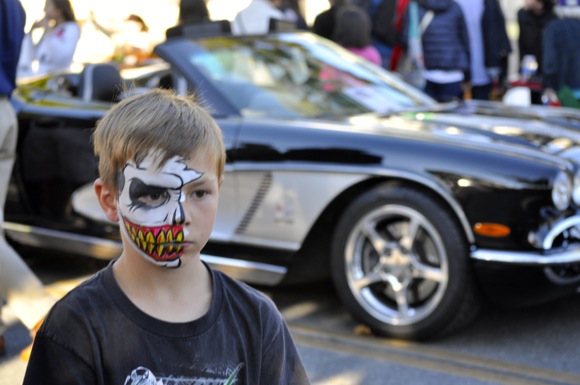 What ever street you entered the 10th annual Downtown Menlo Park Block Party this year, you were likely treated to a new look from previous years.

There were people wearing virtual reality goggles courtesy of Oculus, a Facebook company, with lines to give it a try. There were folks making pretty floral bouquets, courtesy of Menlo Park-based non-profit Random Acts of Flowers. 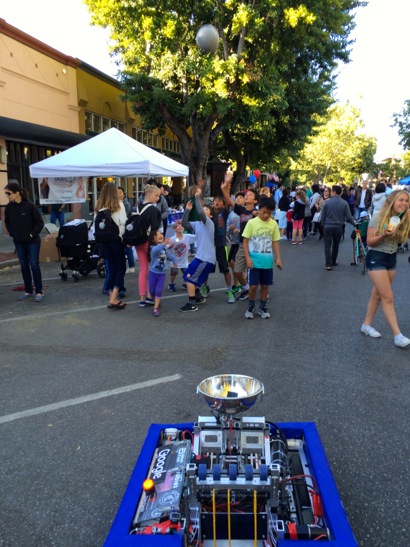 If putting floral arrangements together wasn’t your thing, you could join the kids who loved having one of the robots built by the Menlo-Atherton High School robotics team launch a basketball their way (photo, right). (Doesn’t every suburban street fair feature such a thing?!)

Then there were the cars, lots of them. Most of them were vintage, and they were a very welcome addition to this year’s block party,which also included  farm equipment that kids got to climb aboard for a glimmer of what a farmer’s life was like.

And, if you were a lucky enough photographer, you got a kid with half his face painted at the perfect intersection in front of an early 60s Corvette.

Side note: Instead of eating outside, we nipped into LB Steak, which serves the best burgers, both the Classic and Steakhouse. Sat next to two guys at the bar who come weekly to get their burger fix. 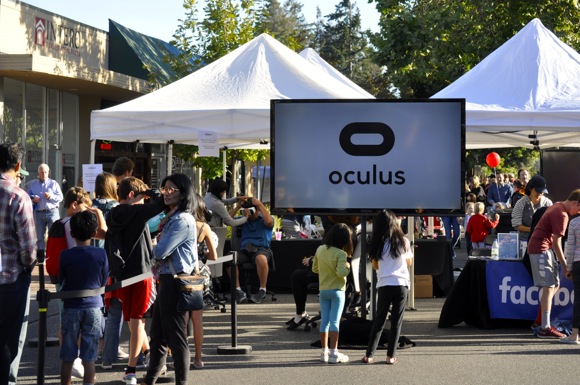 Even those who chose to eat outside, the blustery weather didn’t damper attendance at what has become the City of Menlo Park’s official launch of summer. And in a random act of weather, the winds calmed down as the evening progressed.